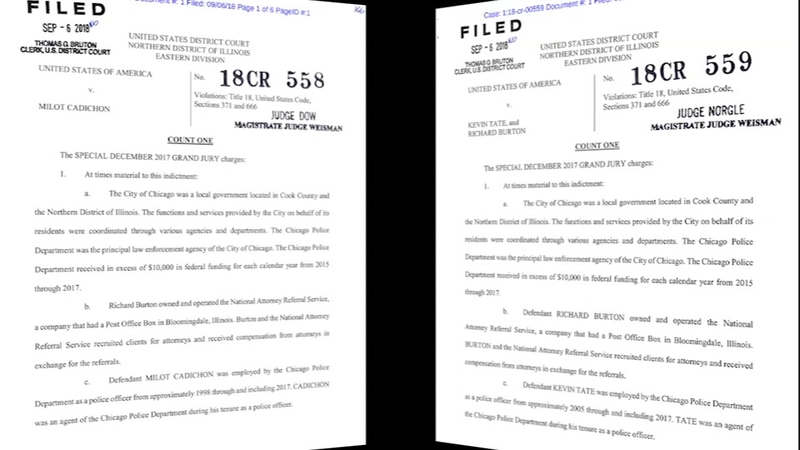 Both officers are accused of accepting thousands of dollars in kickbacks in exchange for insider information about traffic crashes.

In a statement released Friday, the U.S. Attorney's Office of the Northern District of Illinois said CPD Officers Kevin Tate, 47, and Milot Cadichon, 46, gave information from crash reports to Richard Burton of National Attorney Referral Service in Bloomingdale before the information was made public.

Cadichon and Tate face federal charges for using interstate wire transfers to obtain the bribes and for taking bribes as members of an agency that receives federal funding.

Both have been relieved of their police powers pending the outcome of the investigation. Neither officer has been arrested.

In 2014, Tate was honored with another officer for helping children escape a burning building in West Pullman.

"The most important thing that any police officer strives for in their career is earning the trust and confidence of the people they serve. We represent a symbol of justice, and integrity is at the forefront of everything we do. If proven the allegations against these two officers are a disgraceful abuse of what I and the 13,000 selfless men and women of the Chicago Police Department have dedicated our lives to. Both officers have been relieved of their police powers pending the outcome of the federal investigation."