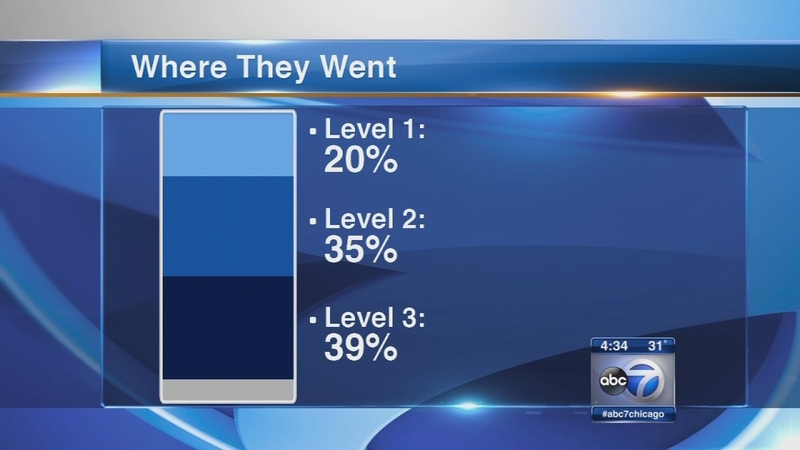 One-third of students affected by closures at low-rated schools

CHICAGO (WLS) -- What happened to the 11,000 students affected by the CPS school closure in 2013 - and why did they choose the schools they did?

Those questions are answered in a new report by the University of Chicago on the controversial closings, which affected 50 schools. Practical considerations figured into decisions on where students went much more than it appears administrators imagined.

Safety and ease of transportation were considerably more important to families, it turns out, than simply heading for their prescribed welcoming school in the aftermath of the closure. As a result, only 21 percent of displaced students ended up in significantly better academic surroundings - the schools with the CPS top ratings.

The University of Chicago's Consortium on Chicago School Research found one-third of displaced students re-enrolled in schools other than their designated welcoming school. On average, they went to facilities with lower performance ratings than their designated school, but still higher their closed school.

"I think safety together with transportation or lack of transportation really played a role in how families thought about which schools to enroll their kids in," said Maria de la Torre, University of Chicago Consortium on Chicago School Research.

Those considerations as well as a welcoming atmosphere and better student-teacher ratios are on the minds of new students at Chappell Academy in the city's North Side. These students came from Trumbull Elementary, a 13-minute walk east along Foster Avenue. And for the most part, they're now happy.

"The students here are really nice and show the respect for everyone else, there are no fights that I have seen in a while, not like Trumbull," said Nino Ocupe, a student at Chappell Elementary.

"My fifth grader has come so far along with the help that I didn't see before at Trumbull, they're amazing," Morua said.

Researchers say the two-thirds of displaced students who did end up where CPS wanted them to go represent a higher rate compared to prior school closings.

But, the report says: "...students' achievement (improves) only if they (move) to a substantially higher-performing school than the one they left."

This is where they actually went:

"Most of them found that the welcoming school was just fine and was good for their children, and in some cases people felt that there was no choice," de la Torre said.

CPS says the report proves the wisdom the "strategic, thoughtful, coordinated approach we took to managing the transition process."

The Chicago Teachers Union says the fact that parents valued practical matters more than school ratings shows "the growing disconnection between the city's decision-makers and the lives of every day Chicagoans."