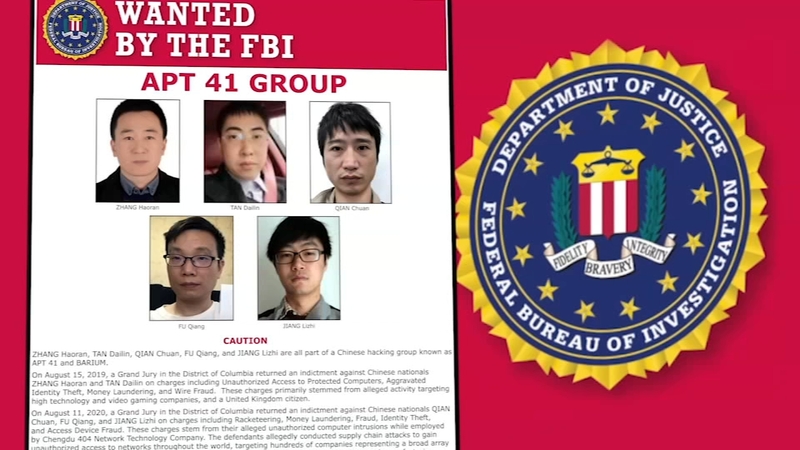 CHICAGO (WLS) -- It takes 19 hours to fly from Kuala Lumpur in Malaysia to Chicago. But for "crypto-jackers" in Southeast Asia, stealing data and money from victims in Illinois required only a few seconds and a couple of computer keystrokes.

The ABC7 I-Team has learned that Illinois businesses were among the targets of corporate thievery by hackers who appear linked to Chinese intelligence.

Five Chinese nationals and a pair of Malaysian businessmen were charged in a years-long hacking scheme that U.S. prosecutors say used a worldwide video game-maker as the bait and the cover for the lucrative criminal operation.

The Illinois victim-corporations are not named and neither is an Indiana university that is referred to as a target of the overseas criminal scheme.

On Wednesday, 9,276 miles from Chicago, the Malaysian businessmen were arrested on charges that they conspired with digital spies to profit from long-distance computer break-ins targeting videogame companies in the U.S., France, Japan, Singapore and South Korea.
Wong Ong Hua, 46, and Ling Yang Ching, 32, were arrested and charged with using their Malaysian firm SEA Gamer Mall as part of the enterprise.

The company did not respond to questions from the ABC7 I-Team, and Hua and Ching are likely to fight extradition, according to DOJ investigators.

The five Chinese residents named in separate indictments are all fugitives. Three are accused of racketeering and all face money laundering charges.

"As many people know-especially if you have kids, there's a lot of coins, tokens, digital currency involved in a lot of these online games. They would steal that digital currency, they would then work with the two Malaysians that are cited in indictment number two, that would then essentially fence and sell that stolen digital currency online to other innocent third parties," Sherwin explained.
In Washington, Justice Department officials were highly critical of the Chinese government, leaving little doubt that American government leaders believe China backs the crypto-jacking schemes.

"We know the Chinese authorities to be at least as able as the law enforcement authorities here and in likeminded states to enforce laws against computer intrusions," Deputy Attorney General Jeffrey Rosen said on Wednesday. "But they choose not to."

"No responsible government knowingly shelters cyber criminals that target victims worldwide in acts of rank theft," Rosen said, noting that one of the Chinese defendants boasted to a colleague he was "very close" to China's Ministry of State Security and had the kind of clout that would protect him "unless something very big happens."

"We're here today to tell these hackers and the Chinese government officials who turned a blind eye to their activities that their actions are once again unacceptable," said FBI deputy director David Bowdich.