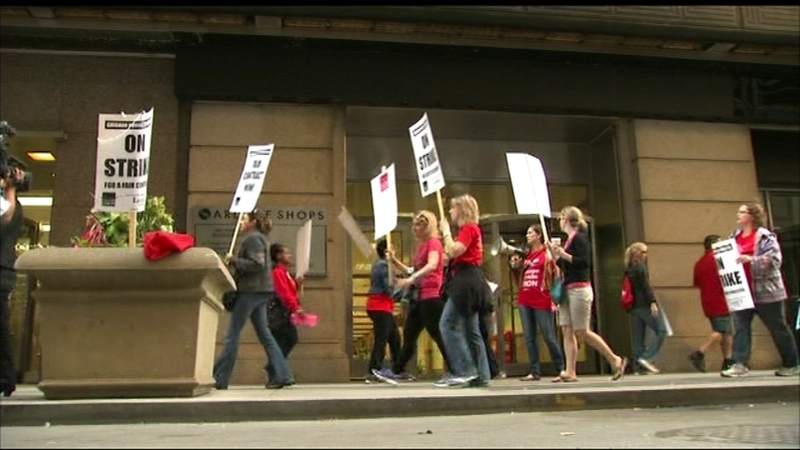 CHICAGO (WLS) -- The Chicago Teachers Union is gearing up for a one-day strike on Friday, April 1. But what happens if a teacher shows up for school instead of taking part in the "day of action"?

While not every teacher may not agree with the one-day strike, it's expected that most will go along with Friday's action. Those who do not could be shut out of voting, meetings, and ultimately removed from union membership.

On April 1, Facets on West Fullerton is preparing "Free Movie Friday", an unusual one-day movie camp for 5 to 12-year-olds that will be part of the Chicago International Children's Film Festival. The impromptu weekday camp during the school year will to teach children how to become critical movie goers.

This and other activities around the city are planned as a Chicago Teachers Union plans a one-day strike, leaving kids and parents preparing to be out of school.

"Teachers, paraprofessionals and clinicians will not be going to work that day. We're picketing in the morning, starting at 6:30 at schools all around the city," said Jesse Sharkey, vice president of the Chicago Teachers Union.

We have seen previous CTU rallies and marches as the union is negotiating a new contract with Chicago Public Schools. The union represents 27,000 teachers and education professionals.

The majority of the union representatives approved the day of action and those who do not participate could face action by the union.

"If someone crosses the line, there will be provisions which could potentially result in them losing their membership in the union," Sharkey said.

"Children and parents should come first. And homeowners and taxpayers, small business owners in Chicago, should also have their interests reflected in this process," said Gov. Bruce Rauner.

While visiting Wilmette Junior High School Monday, Rauner talked about a desire to increase education funding and was critical of CTU's planned action.

"The leaders are willing to take the law into their own hands and break the law? That's wrong, and it's an abuse of power," Rauner said.

Monday happens to be the deadline for nominating petitions for CTU president.

During the seven-day strike in 2012, only 19 union members crossed the picket line. So this Friday, we will likely see a lot of participation.