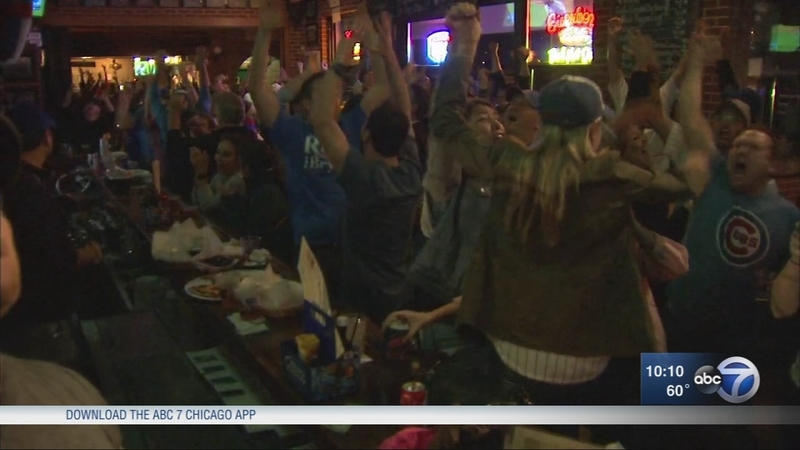 Fans cheer Cubs on in Game 4 of NLCS

CHICAGO (WLS) -- The Chicago Cubs' bats came alive in Game 4 of the NLCS, beating the Los Angeles Dodgers 10-2 to even the series at two games apiece.

The Cubs got home runs from Addison Russell and Anthony Rizzo to give fans something to cheer for after being shutout in back-to-back games.

"It was sort of quiet and then out of nowhere, it was just really an explosion of happiness," said Cubs fan Brian Stone.

The Cubs needed at least one win in LA to send the series back to Wrigley Field, where Jim Anixter will be in his familiar seat wearing his familiar pink cap.

"I get more notoriety than Bill Murray and all these other celebrities. I must take 50-60 selfies and sign autographs every day," he said.

Since 1966, he's had front row season tickets behind home plate, getting more face time than most of the players.

"Assuming they win I will be 72 on Saturday, and it'd be a great 72nd birthday - they're going to put my name on the scoreboard "Happy Birthday to the Pink Hat Guy," Anixter said.

Game 5 will take place in Los Angeles on Thursday at 7:08 p.m. The winner of the NLCS will take on the Cleveland Indians, who advanced to the World Series Wednesday after defeating the Toronto Blue Jays in the ALCS.

Major League Baseball announced Wednesday night that Games 6 and 7 (if necessary) will start at 7:08 p.m. on Saturday and Sunday, with both games taking place in Chicago at Wrigley Field.

MASSIVE CUBS (WO)MAN CAVE IN LAKE IN THE HILLS

Stewart McVicar built a massive Cubs "man cave" in the basement of his Lake in the Hills home, but he opted to take in the Cubs game Wednesday in person at Dodger Stadium. With Stewart away, his wife ensured the "man cave' didn't sit empty as she invited her friends for a girls night in to view the game.

Anthony Rizzo, Addison Russell and the rest of the Chicago Cubs' bats broke out in a big way.

Rizzo homered and ended a postseason slump with three RBIs, Russell's two-run drive highlighted a four-run fourth that stopped Chicago's 21-inning scoreless streak, and the Cubs routed the Los Angeles Dodgers 10-2 on Wednesday to even the NL Championship Series at 2-all.

Kenta Maeda is set to start for the Dodgers in Game 5 on Thursday against Jon Lester. Before the game, manager Dave Roberts said he would not use Clayton Kershaw on short rest after the Los Angeles ace threw a bullpen session Wednesday.

Following consecutive shutout losses, the Cubs rapped out 13 hits on an 80-degree night with the warm Santa Ana winds fluttering the flags in center field.