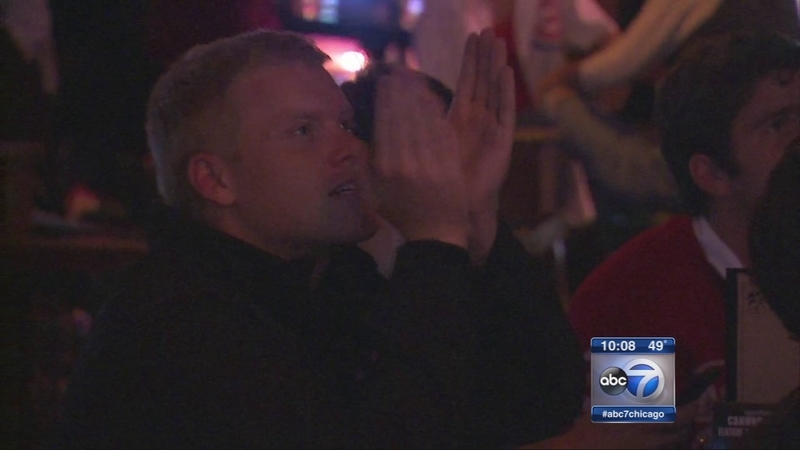 CHICAGO (WLS) -- Chicago Cubs fans who plan to watch Game 3 of the National League Championship Series in person at Wrigley Field will be spending a pretty penny on tickets.

The N.Y. Mets beat the L.A. Dodgers on Thursday night, which means the Cubs will face the Mets in NLCS Game 1 at Citi Field at 7:07 p.m. Saturday.

"I really think they've got a good chance. Their heart's in it. It's been a really long time for them, and I'm really hoping they're going to go all the way this year," said Jessica Thomas, a Cubs fan.

"It's really special. I've waited 37 years for this, so it's fun," said Ellen Weirich, a Cubs fan.

At SitClose Tickets, the phones haven't stopped ringing. Broker Steve Buzil is a huge fan of the Cubs' pennant push.

"I love them a lot, almost as much as my wife. (laughs) I didn't say that honey," Buzil said.

Buzil says tickets for Games 3 and 4 at Wrigley are going for about $500 to $2,500 on the secondhand market. He says the Mets' win could send prices even higher, so fans should buy tickets sooner rather than later.

"If it's the Mets, I believe you're going to see a spike in the market, a rise in the price," Buzil said.

Avoiding the secondhand market may be tough. The Cubs announced Thursday that more than 1 million people have registered on the Cubs website for a chance to buy single-game NLCS tickets at face value. A lucky group of fans were notified by email Wednesday night that they'll be able to go online on Friday to try to buy tickets.

Registration requires fans to enter their name, address, email information and fill out a short survey.

"I think it's data-mining, personally. I don't think they're giving away a lot of tickets," Buzil said.

Despite what tickets will fetch, season ticket holder Andrew Hampe has no intention of selling his seats for the potential clincher.

When asked what it would take to give up his Game 4 tickets, Hampe said: "Nothing the world has come up with so far. Nothing I can think of. World peace. World peace maybe."