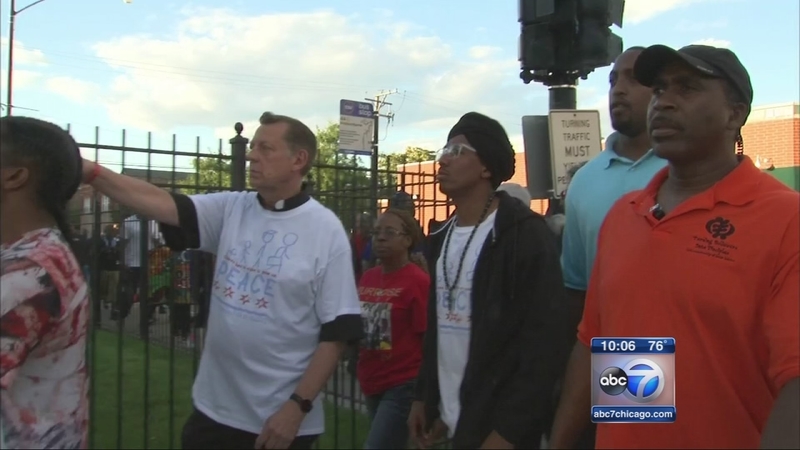 CHICAGO (WLS) -- Activists with and outside of the Black Lives Matter movement, clergy, local leaders and many other groups in Chicago are reacting to the Dallas police ambush.

"This is a very difficult time in our country, it's a painful time," Pfleger said. "America is broken."

"It is very apparent that we're all in pain, and we're frustrated. And I often say, people ask why do we do this in our own community? Because hurt people hurt people," said Cannon.

Salem Baptist Church of Chicago hosted a neighborhood party to bridge the divide between the community and the police, and hoped the dialogue would bring about change.

Protesters gathered outside of President Obama's Kenwood home on Friday. One activist, Jedidiah Brown, organized the protest outside the home to personally ask the president to do something about the violence happening between police officers and the black community.

"How do we get from point A to point B with this situation? And what can the president's office do to help us with this crisis we have in America?" he said.

Brown is begging the president for some kind of solution.

"I know there's so much more our president can do to bring healing to the crisis and quality of life in America and that's what I'm asking him to do," Brown said.

Brown and those who joined him sprawled out in the street, simulating bodies at a crime scene.

"It's right outside your doorstep. You cannot do nothing. You have to do more than speak," he said.

"BYP-100 and the black community has a cultivated sense of hopelessness this week," Fresco Steez, a member of BYP-100, said.

The movement has quickly built momentum from the boiling anger over videos like the Alton Sterling, Philando Castillo and Laquan McDonald shooting.

"The black community is very tired of this public display of black death," Steez said.

Black Lives Matter marches have dominated Chicago streets during fallout from police shootings. Organizers worry the mass shooting in Dallas may have muddled their message.

The shootings come at a time of increased tension between police officers and the African-American community.

Build Chicago held a march in Chicago's Austin neighborhood which included police officers. Organizers say it was planned long before the events of this week and is a great way to help keep the peace.

West Side pastor, Reverend Ira Acree, spent the morning on the phone and on social media condemning the ambush of Dallas police officers while asking protestors in Chicago to remain non-violent.

"To randomly go out and shoot someone who has on a blue uniform and because they are a white officer, that's not fair," he said.

Acree joins a growing chorus of clergy calling for peace as demonstrations continue following the police involved shootings this week. The men were reportedly carrying guns.

"We are angry. We are frustrated and we're frightened. The events that occur where black men are being killed by police concerns us all," Rufus Williams, a member of Building Better Families, said.

The killings, which were both videotaped, have caused a backlash and renewed demands for police accountability.

"The attack on the officers was a cowardly and insane act of terrorism and in no way represents anything about our long struggle for peace and justice for all," Reverend Jesse Jackson said.

Jackson was joined at Rainbow Push Coalition headquarters Friday by elected officials and community activists who again called on President Obama to convene a white house conference on violence.

"I condemn the acts of this madman or madmen in the strongest terms. Our movement will not compromise the moral high ground of nonviolence. Never," Rev. Jackson said.

"It's crucial to take this time, this moment, and hold ourselves accountable," Shari Runner, a member of Chicago Urban League, said.

The group also planned to come up with a way to deal with the poverty and racial disparities, they say spark neighborhood violence and unrest.

"American is violent and we need to do something to address the issue," Rep. Mary Flowers said.

Organizers are hoping to do something about the violence by having neighborhood kids interact with police and begin to heal some of those broken relationships. Those participating will have the rally then have their annual basketball game.

Mayor Rahm Emanuel offered condolences to the victims and their families and condemned the violent acts, writing: "As a country and as a city we can never accept acts of violence anywhere, at any time, against anyone, for any reason. We cannot be a country where our differences define us - be it profession, race, creed, or sexual orientation. We must recommit ourselves to our common values to confront corrosive violence. We must build a dialogue that builds trust between us all. That is the foundation of this nation, that is what binds us together, and that is what we all must strive towards every day."

In statements, Republican and Democrat lawmakers offered condolences for officers who were fatally shot or injured Thursday night during a protest of the recent shootings in Louisiana and Minnesota.
Republican U.S. Rep. Robert Dold expressed hope that "unity prevails over divisiveness" and Democrat U.S. Senator Dick Durbin said the shooting is a reminder of the sacrifices that officers make and asked political leaders to work to end the "cycle of hate and violence."
Democrat U.S. Rep. Tammy Duckworth asked that people don't say things that might "escalate this tragic situation." Republican U.S. Rep Randy Hultgren asked that people "stand with the peaceful protesters who reject such violence."

Democrat U.S. Rep. Robin Kelly wrote: "These tragedies are hard to reconcile. I come from a family of cops so my admiration for law enforcement runs deep. So does the concern and fear I hold as a mother of a black son who feels like it's open season on him in America."

Indiana Gov. Mike Pence offered his condolences to the families of the law enforcement officers killed, calling it "a heartbreaking reminder of the risks the men and women of our law-enforcement community take every day to protect and serve our communities."