Protesters take over Rep. Dan Lipinski's office after he takes stand against abortion 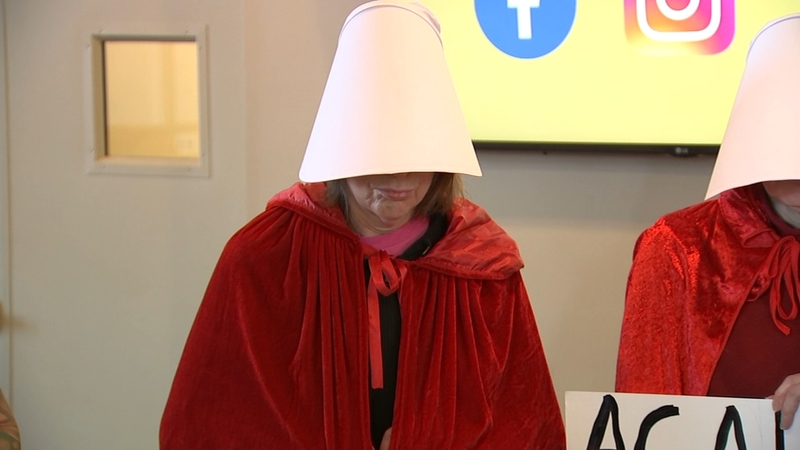 Protesters take over Lipinski office after he takes stand against abortion

LOCKPORT, Ill. (WLS) -- Protesters took over the suburban Lockport office of Rep. Dan Lipinski on Monday to raise awareness about his pro-life stance ahead of the March primary.

"We would like to schedule a meeting...we don't really want to leave today until we have a meeting scheduled," the protesters told Lipinski's staffers.

About 30 protesters gathered just outside Lipinski's office to call him out for supporting a brief asking the Supreme Court to revisit and possibly overturn the Roe v. Wade decision.

"Lipinski is trying to violate our rights to healthcare, not just our rights, but the entire country's rights, that's why I am here, and for that he needs to be voted out of office," said Holly Fingerle, of Indivisible South Suburban Chicago.

Over the weekend, Chicago Mayor Lori Lightfoot tweeted "time to leave" at Lipinski for supporting the brief.

I support a big tent but there's no room under the flaps for anyone who is actively seeking to deny women control over our bodies. Time to leave @danlipinski. https://t.co/DvZaSP8jXx

ABC7 caught up with the congressman in south suburban Summit on Monday. He denied that he's out of touch with voters just because of this one issue.

"My opponents want to make everything about this campaign about abortion and I think that's a mistake for them," Lipinski said.

Two years ago Lipinski narrowly beat Marie Newman, who is one of two challengers in the Democratic primary on March 17.

"If 70% of the district believes that they are pro-choice and that 77%, if we project that down from the country's wishes, do not want Roe v. Wade overturned and you have decided to live inside the 23%, I don't think that you're really representing the district," Newman said.

Lipinski said abortion is not the main thing voters care about.

As for the meeting the protesters demanded, Lipinski's office said they are working out the details.