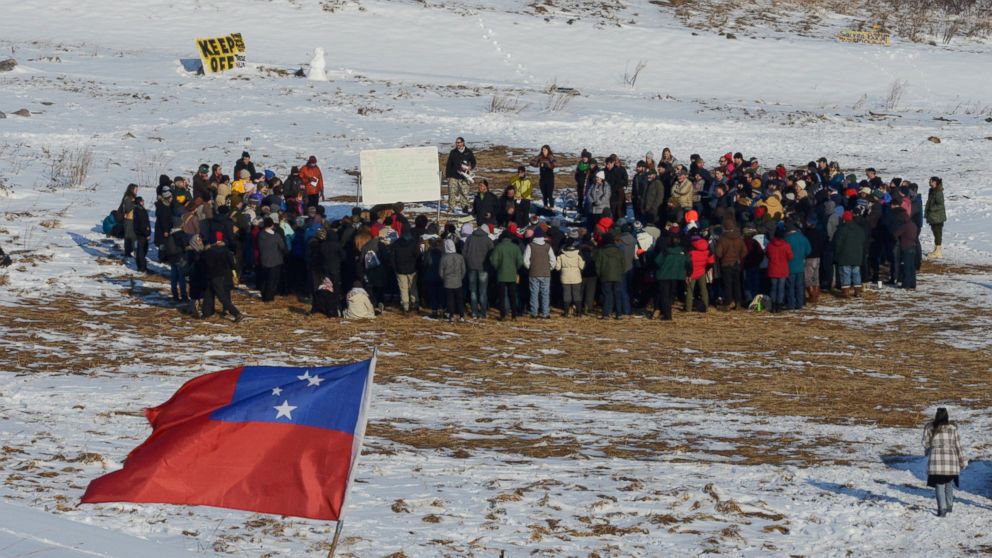 The decision is a victory for the several thousand camped near the construction site, who've said for months that the four-state, $3.8 billion project would threaten a water source and cultural sites.

The pipeline is largely complete except for the now-blocked segment underneath Lake Oahe, a Missouri River reservoir. According to a news release, Assistant Secretary for Civil Works Jo-Ellen Darcy said her decision was based on the need to "explore alternate routes" for the pipeline's crossing.

"Although we have had continuing discussion and exchanges of new information with the Standing Rock Sioux and Dakota Access, it's clear that there's more work to do," Darcy said. "The best way to complete that work responsibly and expeditiously is to explore alternate routes for the pipeline crossing."

The company constructing the pipeline, Dallas-based Energy Transfer Partners, had said it was unwilling to reroute the project. It and the Morton County Sheriff's Office, which has done much of the policing of the protests, didn't have immediate comment.

U.S. Secretary for the Interior Sally Jewell said in a statement that the Corps' "thoughtful approach ... ensures that there will be an in-depth evaluation of alternative routes for the pipeline and a closer look at potential impacts" and "underscores that tribal rights reserved in treaties and federal law, as well as Nation-to-Nation consultation with tribal leaders, are essential components of the analysis to be undertaken in the environmental impact statement going forward."

The federal government has ordered people to leave the main encampment, which is on Army Corps of Engineers' land, by Monday. But demonstrators say they're prepared to stay, and authorities say they won't forcibly remove them.

Earlier Sunday, an organizer with Veterans Stand for Standing Rock said tribal elders had asked the military veterans not to have confrontations with law enforcement officials, adding the group is there to help out those who've dug in against the project.

About 250 veterans gathered about a mile from the Oceti Sakowin, or Seven Council Fires, camp in southern North Dakota for a meeting with organizer Wes Clark Jr., the son of former Democratic presidential candidate Gen. Wesley Clark. The group had said about 2,000 veterans were coming, but it wasn't clear how many actually arrived.

"We have been asked by the elders not to do direct action," Wes Clark Jr. said. He then talked about North Dakota authorities' decision to move away from a key bridge north of the encampment by 4 p.m. Sunday if demonstrators agree to certain conditions, saying the National Guard and law enforcement have armored vehicles and are armed.

"If we come forward, they will attack us," Clark said. Instead, he told the veterans, "If you see someone who needs help, help them out."

Authorities said they'll move from the north end of the Backwater Bridge if protesters stay south of it and come to the bridge only if there is a prearranged meeting. Authorities also asked protesters not to remove barriers on the bridge, which they have said was damaged in the late October conflict that led to several people being hurt, including a serious arm injury.

"The question was asked if we would consider pulling back from the Backwater Bridge," Cass County Sheriff Paul Laney said in a Saturday news release after a conversation between law enforcement and the group's organizers, "and the answer is yes! We want this to de-escalate."

Protesters also are not supposed to walk, ride or fly drones north of the bridge, Laney said. Any violation will "will result in their arrest," the statement said.

The bridge blockade is something that Standing Rock Sioux tribal chairman Dave Archambault has been asking to be removed, the Bismarck Tribune reports , and something he said he would to talk to Gov. Jack Dalrymple about when they meet in person. A date for that meeting hasn't been set.

Veterans Stand for Standing Rock's GoFundMe.com page had raised more than $1 million of its $1.2 million goal by Sunday - money due to go toward food, transportation and supplies. Cars waiting to get into the camp Sunday afternoon were backed up for more than a half-mile.

"People are fighting for something, and I thought they could use my help," said Navy veteran and Harvard graduate student Art Grayson. The 29-year-old from Cambridge, Massachusetts, flew the first leg of the journey, then rode from Bismarck in the back of a pickup truck. He has finals this week, but told professors, "I'll see you when I get back."

Steven Perry, a 66-year-old Vietnam veteran who's a member of the Little Traverse Bay band of Odawa Indians in Michigan, spoke of one of the protesters' main concerns: that the pipeline could pollute drinking water. "This is not just a native issue," he said, "This is an issue for everyone."

Art Woodson and two other veterans drove 17 hours straight from Flint, Michigan, a city whose lead-tainted water crisis parallels with the tribe's fight over water, he said.

"We know in Flint that water is in dire need," the 49-year-old disabled Gulf War Army veteran said. "In North Dakota, they're trying to force pipes on people. We're trying to get pipes in Flint for safe water."

On Monday, some veterans will take part in a prayer ceremony in which they'll apologize for historical detrimental conduct by the military toward Native Americans and ask for forgiveness, Clark said. He also called the veterans' presence "about right and wrong and peace and love."

Full statement below:
The Department of the Army will not approve an easement that would allow the proposed Dakota Access Pipeline to cross under Lake Oahe in North Dakota, the Army's Assistant Secretary for Civil Works announced today.

Jo-Ellen Darcy said she based her decision on a need to explore alternate routes for the Dakota Access Pipeline crossing. Her office had announced on November 14, 2016 that it was delaying the decision on the easement to allow for discussions with the Standing Rock Sioux Tribe, whose reservation lies 0.5 miles south of the proposed crossing. Tribal officials have expressed repeated concerns over the risk that a pipeline rupture or spill could pose to its water supply and treaty rights.

"Although we have had continuing discussion and exchanges of new information with the Standing Rock Sioux and Dakota Access, it's clear that there's more work to do," Darcy said. "The best way to complete that work responsibly and expeditiously is to explore alternate routes for the pipeline crossing."
Darcy said that the consideration of alternative routes would be best accomplished through an Environmental Impact Statement with full public input and analysis.