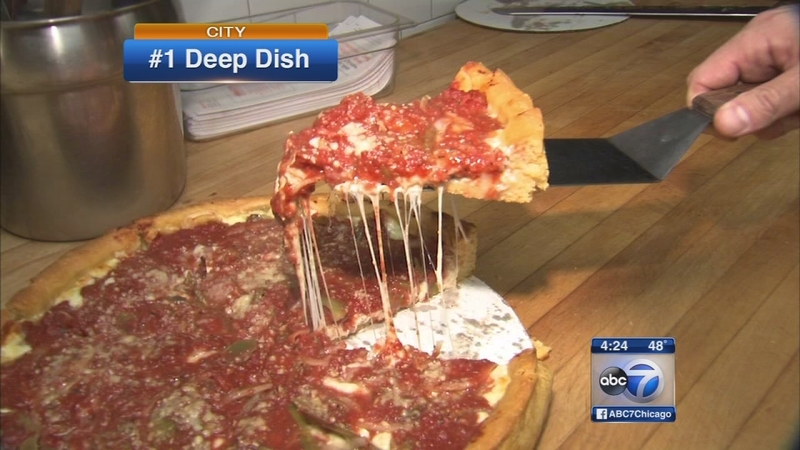 CHICAGO (WLS) -- As ABC7's Hungry Hound Steve Dolinsky pointed out last week, there are plenty of delicious thin crust pizzas in Chicago - whether they're artisan, tavern-style or Neapolitan. But our city has a big reputation, of course, so he's unveiling his three favorite deep dish versions in the city.

It's the third installment of his four-part Pizza Quest series.


My number three deep dish in the city comes from Pizano's, which has six locations in Chicago. The dough rises twice before getting topped with slices of whole milk mozzarella from Wisconsin, plus ground Anichini sausage and sauce containing both crushed and whole tomatoes. Baked in 600-degree ovens, they emerge hefty and cheesy with a rich, crispy-edged dough.

In Bucktown, my number two deep dish is the venerable My Pi, which has been around for more than 40 years. The key is the highly-seasoned tomato sauce, as well as the dough.

"My dad was a baker, grandfather, great-grandfather, and it was handling the dough in a different way than most pizzerias actually handle the dough," said My Pi owner Richard Aronson.

The sausage is also dad's recipe, and pies are topped with oregano and pecorino Romano. They emerge from a conveyor oven with a crispy crust and a well-balanced cheese-to-sauce-to-crust ratio.

My number one pick, however, is in Roscoe Village, at Bartoli's Pizzeria. The owner is the grandson of Fred Bartoli, the original owner of Gino's East.

"My goal was to recreate what I remember growing up as a young kid running through my grandfather's restaurant. And I haven't had that taste for a long time," said Bartoli's owner Brian Tondryk.

An olive oil-slicked dough, whole milk mozzarella slices and sausage made by their family butcher with fennel and black pepper, not to mention a killer tomato sauce that's both chunky and smooth with hints of oregano and basil.

"When I created the pizza I wanted to make it a balanced pizza. Some deep dish is way too heavy, some stuffed pizzas are way too heavy. I found a good combination of the right amount of cheese, right thickness of the dough, and the right balance of sauce to our sausage," he said.

One of the things I like about all three of these deep dishes is the issue of ratio. There's an equal amount of dough to cheese to sauce, to that every bite is a pleasure.