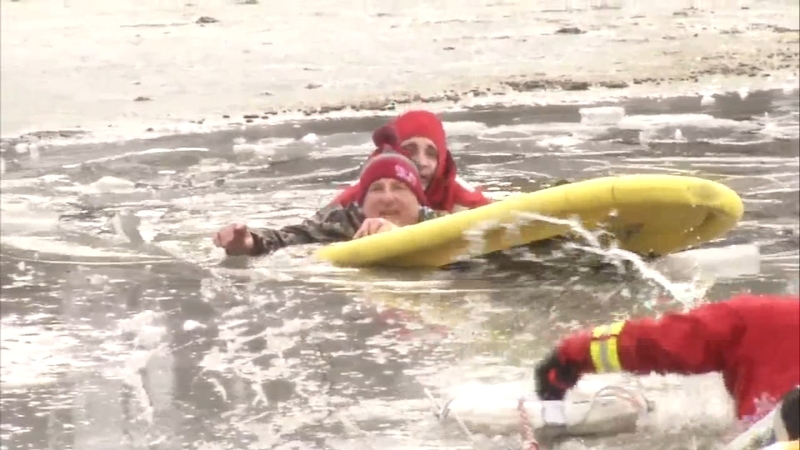 Man rescued from icy pond after risking life to save his dogs in Del.

MARSHALLTON, Delaware -- Surface Water Rescue members say a man is lucky to be alive Friday night, and he himself is ever so grateful to those who rescued him from an icy pond.

Only Action News was there as Surface Water Rescue teams conducted a dramatic rescue to save George Esterling.

He fell into an icy pond in Pike Creek. He had gone in after his dogs, a boxer and a bassett hound, who were chasing geese.

"Right when I got to the dogs, the ice fell in for me. So I went in," Esterling said.

He managed to throw dogs to safety, but he himself was unable to get out.

"I tried and tried, but every time I tried I boosted myself up, the ice would cave in. It was deep, I couldn't touch bottom," Esterling said.

Firefighters from the Newcastle County Rescue Team arrived on the scene after a young couple called to report what happened.

"He kept saying, he can't stand, he can't move his hands. So when I got to him, I got into the hull with him. I got behind him. I put my arms under his arms and pinned him to our rescue sled," said Anthony Dell Aquila, Hockessin Fire Company.

"As time went on, I was getting colder and colder, and my arms and hands felt completely numb," Esterling said.

"He was minutes away from going under. He was panicking. He was ready to give up," said Michael Emmell, Millcreek Fire Company.

Finally, they were able to get him out of the pond. They rushed him to Christiana Care Hospital, where he was treated for hypothermia.

As of Friday night, his dogs were OK and Esterling was back at work at his seafood restaurant, grateful to his rescuers and the couple who saw what happened and called for help.

"If it wasn't for the young couple there, things would have been a little different. I wish I had their names, but thank you," Esterling said.

Every winter the rescue team has to rescue someone from the icy waters.