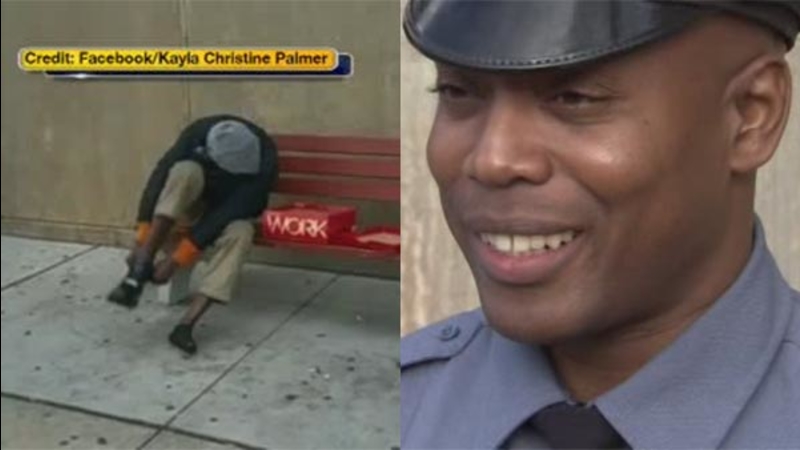 LINDENWOLD, N.J. -- An area police officer is getting recognition after a video capturing his act of kindness went viral.

Joyner thought he recognized the man, who he'd seen lying on a bench earlier that day.

"I asked him, I said, 'Where are your shoes?' So he hesitated and it appeared that he became embarrassed, and in a very low mumble he stated he doesn't have any," said Joyner.

Instead of giving the man a hard time, Joyner gave him a hand.

He went across the street to a Payless shoe store and, with his own money, he bought the man a brand-new pair of size 12 boots.

"It was a man that was down on his luck. He simply wanted to ride a bus, but he couldn't afford shoes to ride a bus, so it just seemed like the right thing to do," said Joyner.

The video has received more than 2 million hits. Those who know Joyner tell us his actions come as no surprise.

"Oh that's him, that's him. I'm not surprised at all, not at all. He's a caring person," said Diana Murphy of Hammonton, New Jersey.

"If you know the officer, you know that he doesn't look for any recognition," said Lt. Johnny Santiago.

The son of a retired Camden cop, Joyner has been with the DRPA police force for eight years and said he was raised to look out for the less fortunate.

"The thing is, a lot of officers have done what I have done and more," said Joyner. "I just happen to be caught on camera."