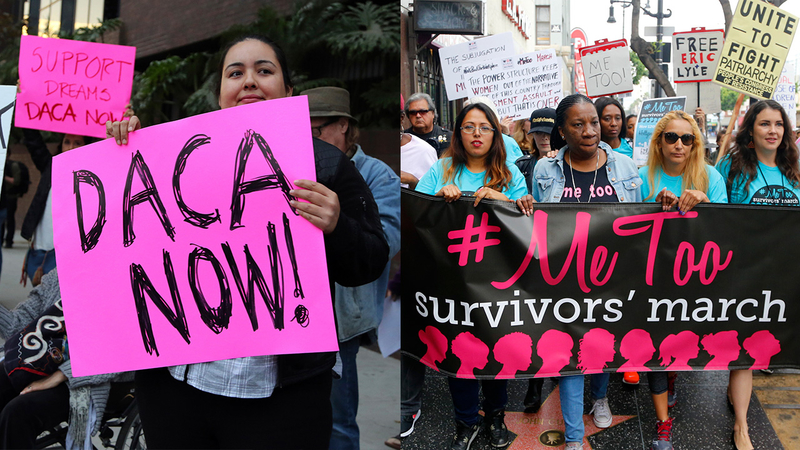 Dreamers, #MeToo leaders among State of the Union guests

At least 24 House Democrats committed to bring DACA recipients known as Dreamers to the State of the Union, according to a list provided to ABC News. About 70 democratic lawmakers said they will bring sexual assault victims or women activists in support of the #MeToo and Time's Up movements.

It is an honor to announce that Mayor @CarmenYulinCruz of San Juan, Puerto Rico will join me at the #SOTU. Throughout the crisis in Puerto Rico, Mayor Cruz has shown extraordinary leadership and fearless advocacy for her city.

On Martin Luther King Jr. Day, Michigan Rep. Debbie Dingell committed to bringing Cindy Garcia, the wife of Jorge Garcia, a man who was deported to Mexico after living in the U.S. for 30 years. Jorge, a father of two, was brought to the U.S. at the age of 10.

On #MLKDay, America watched in horror as Jorge Garcia, a father of two who was brought here as a child, was torn from his family & the home he knows. Honored that his wife Cindy will join me at #SOTU to be a voice for aspiring Americans who deserve action https://t.co/AgV4Ka8bem

New Jersey Rep. Bonnie Watson Coleman will bring Rose Gunter in honor of her late aunt Recy Taylor, a black woman who was raped by six white men in 1944. Taylor bravely identified her attackers, but the men were not charged by two grand juries, in spite of a confession by one of the men, according to the New York Times.

Taylor died on December 29, 2017, at the age of 97. Her name was recently placed in the spotlight after Oprah Winfrey shared her story during her acceptance speech for the lifetime achievement award at the Golden Globes.

I am excited to announce that I have the honor of bringing Rose Gunter, niece of Recy Taylor, as my guest to #SOTU. Her aunt's legacy lives on through the many women and allies who are advancing the transformative #MeToo and #TimesUp movements in this country.

Patricia King represents the best and bravest our nation offers. She will make our Commonwealth and our country proud at the State of the Union on Tuesday night. https://t.co/Y9PgbhZihx

Bill Nye, a critic of the Trump administration's environmental polices, will be the guest of Rep. Jim Bridenstine R-OK, Trump's nominee to head up NASA. Berdenstine, known for his past comments dismissing man-made causes for global warming, has developed a relationship with Nye, who said he is enjoying a "productive working relationship" with the congressman.

The president's special guests include small business owners, hurricane and wildfire first responders, veterans and two families whose young daughters were murdered by the MS-13 gang.
Report a correction or typo
Related topics:
politicstransgenderhurricane mariadacamilitarydemocratssexual harassmentsexual assaultpresident donald trumphurricaneimmigrationpuerto ricostate of the union
Copyright © 2022 WLS-TV. All Rights Reserved.
RELATED
Who won't be at the State of the Union
STATE OF THE UNION
Why Biden's speech is technically not a State of the Union address
Feds pledge another DC domestic terror attack 'will not happen again'
New threat to blow up Capitol even as militia suspects are rounded up
Pelosi defends decision to rip Trump's State of the Union address
TOP STORIES
5 tax changes that can boost your refund this year
Family demands justice after 23-year-old woman found dead after date
Chicago weather forecast includes snow into Monday | Live radar
Fauci optimistic omicron will peak in February
Overdose investigation leads to $6M worth of cocaine in Wisconsin
After the omicron wave, what's next for the COVID pandemic?
2022 inflation: Expert tips to navigate food, gas prices rising
Show More
Illinois driver's license facilities to resume in-person services
Girl, 8, killed by stray bullet ID'd: ME
19 shot, 4 fatally, in Chicago weekend violence
Rescuers use sausage dangling from drone to lure runaway dog to safety
`Dreadhead Cowboy' pleads guilty to animal cruelty charge
More TOP STORIES News