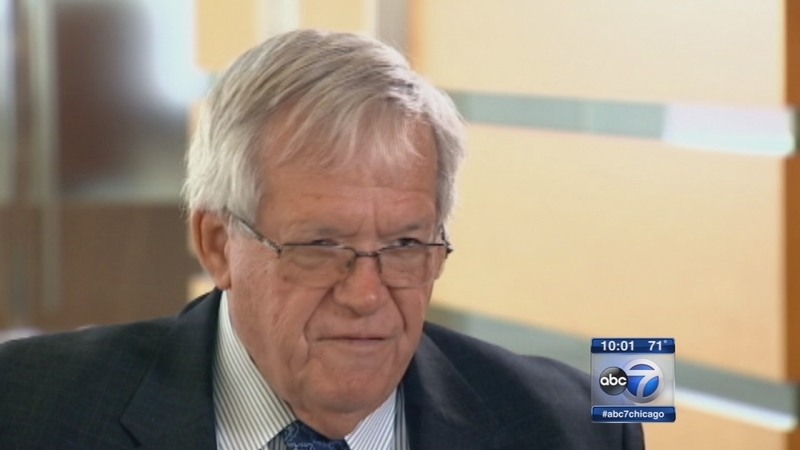 Dennis Hastert, the longest serving Republican Speaker of the House in history, is now in trouble with the feds. He's accused of lying about payments he made to allegedly cover up his own wrongdoing.

Since he was indicted on Thursday, Hastert hasn't been seen in public and hasn't released a response. He has resigned his position on the board of the CME Group in Chicago, and his bio has been removed from the website of the Washington lobbying firm where he was working. The focus now is what the feds say he did wrong.

Hastert is a former high school teacher and coach who went on to become one of the most powerful men in American politics. On Thursday, he was accused of violating banking rules then lying about it to the FBI.

According to the federal indictment, Hastert met with an unnamed "Individual A" five years ago and agreed to pay individual a $3.5 million to compensate for and conceal Hastert's prior misconduct against "Individual A."

He withdrew roughly half that money from bank accounts he controlled. When banking officials questioned Hastert about the transactions, the government says he began making withdrawals of less than $10,000 at a time - just below the amount that has to be reported to bank officials. Prosecutors say he did that 106 times.

"It's a lot of withdrawals of cash and it's a lot of effort to go into preventing the government from learning that you're withdrawing large sums of cash," said Gil Soffer, ABC7 legal analyst.

What the indictment doesn't explain is the relationship between Hastert and "Individual A." The only detail released is that "A" is from Yorkville and has known Hastert for decades.

"It clearly involved something relating to a relationship that he had with another person. It's only a surmise what that might be. But it does appear whatever it was in fact inappropriate and it further appears that the victim of the misconduct may have also been playing an extortion game," Soffer said.

Another question is how a former public servant gains access to such large amounts of money. No date has been set for his arraignment.

It's been eight years since he left Congress, but the Hastert brand still carries a lot of weight here. On Thursday night, his former constituents were stunned by the indictment.

There was no answer at Hastert's home, where the serenity of his sprawling estate in Plano is framed by a lagoon, swimming pool and a garage full of family keepsakes.

"You're prideful of people that are coming from your community and trying to make a difference in Illinois, so it's just disappointing," said Michelle Riordan, a Yorkville resident.

"He's definitely part of the town. It's very surprising. It's a shock," Newcomer said.

His small-town roots are part of the Hastert charm and seen as a salve for a GOP wounded by ethics charges.

"One of the reasons he was chosen as speaker, it was a time in the Republican party where there was a lot of dissension, a lot of controversy. They wanted a good guy who could bring people together," said Laura Washington, ABC7 political analyst.

His time at Yorkville High is never far from the Hastert narrative. His autobiography features lessons he learned as a wrestling coach, including this quote, now read in a different light: "There's no one to blame but yourself if you get pinned."

Born in Aurora, Hastert graduated from Wheaton College. The school of economics and government there is named after him.

On Thursday night, the administration said in a statement: "The college is saddened to learn of these charges."