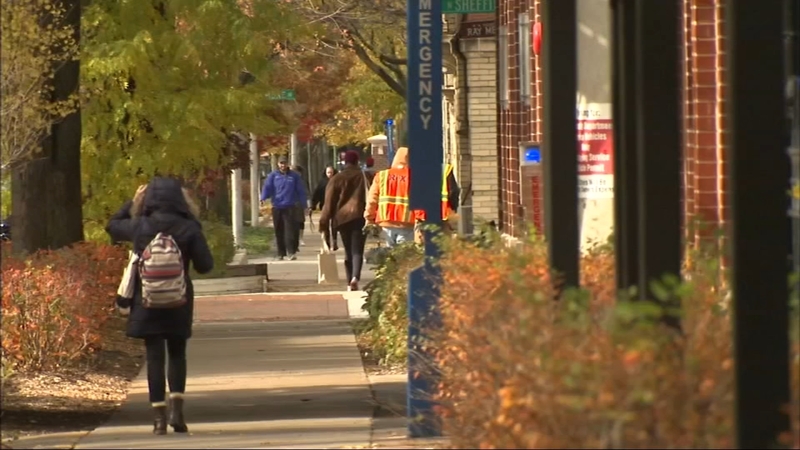 CHICAGO (WLS) -- A DePaul University student was robbed at gunpoint Thursday night by a group of teenagers at the school's Lincoln Park campus, Chicago police said.

The robbery occurred in the 900-block of West Belden Avenue before midnight, police said.

The student told police he was walking near the school's Commons building when three male teenagers, who seemed to be in their late teens, stopped him and demanded money. One of them apparently flashed a gun at the victim, while the others grabbed the victim's cash.

The teens then all ran off after the robbery. The student was not hurt but this incident did spark a community alert from the university that other students received right away via email, and social media.

"It's always pretty scary to see like how close it is to the campus, and how like scary it is out there," said student Hailey Schons.

This is not the first time something like this has happened.

According to DePaul's public safety report, earlier this month another student was robbed in the middle of the afternoon in the same spot. She was not hurt.

"It is the same area. I don't know how this keeps happening," said graduate student Samantha Wilmes.

"I always question what precautions are they going to take with all these robberies because I keep getting a lot of alerts," said graduate student Aixa Arredondo.

Students and those that live in this area tell us they have to always stay alert.

"I actually had a friend who was mugged recently, just came out of nowhere," said Peyton Kaye, a freshman at the school. "It made it really real when he just showed up with his shirt all torn up."

"Lincoln Park is pretty safe for the most part and especially for it to be like right by campus, I thought that was really shocking since you don't expect that to happen, but you know it is late at night you have to assume that no matter where you are there is that possibility," said DePaul student Matt Gagen.

"It definitely makes me feel a little unsafe, but I do feel like this type of stuff is happening in a lot of the neighborhood," said resident Sarah Hammond.

DePaul said there have been four reported robberies in the area. There are several surveillance cameras in the area that may have caught he suspects.