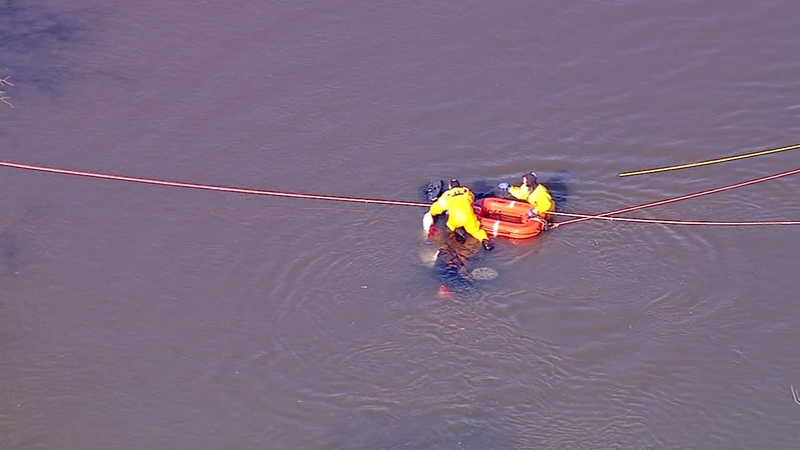 FOREST PARK, Ill. (WLS) -- A woman was rescued after her car went into the Des Plaines River in Forest Park Thursday morning.

The 74-year-old woman was driving westbound on Roosevelt Road at about 9:45 a.m. when she lost control and veered into a bus shelter before going down an embankment and into the river, police said.

Businesses in the area called for help and officers who arrived at the scene swam out to the vehicle.

"In 25 years, I've never done a water rescue like this," said Officer Pete Morrissette was one of the responding officers. "One of our officers, Scott McClintock, took immediate action, swam right out to the car. He was joined by a citizen who appeared to come out of nowhere and swam out there."

Morrissette quickly shed his duty gear as well and jumped into the icy waters.

"I don't know if it was something medically that caused her to go off the roadway, if she got distracted, so right now I don't have the answer to that," he said.

The woman was trapped in the car at first; with time running out, the officers busted the front window and pulled the frightened woman out of the car. The three then stood on the roof of the vehicle before they were rescued by fire personnel who had quickly arrived.

"All we could do is keep her calm and let her know we were going to get her home safely, and happy to know that we did," said Morrissette.

The woman was transported to a hospital in good condition, police said. The officers were not injured.

The dramatic rescue came as the suburban police department grappled with the loss of two officers in recent weeks, one from COVID.

Morrissette said he's not comfortable with being called a hero; he's just glad he was able to help save a life.

Chopper 7HD flew above the scene as the car was pulled out of the river.