Disney lighthouse to keep spotlight on boy killed by gator 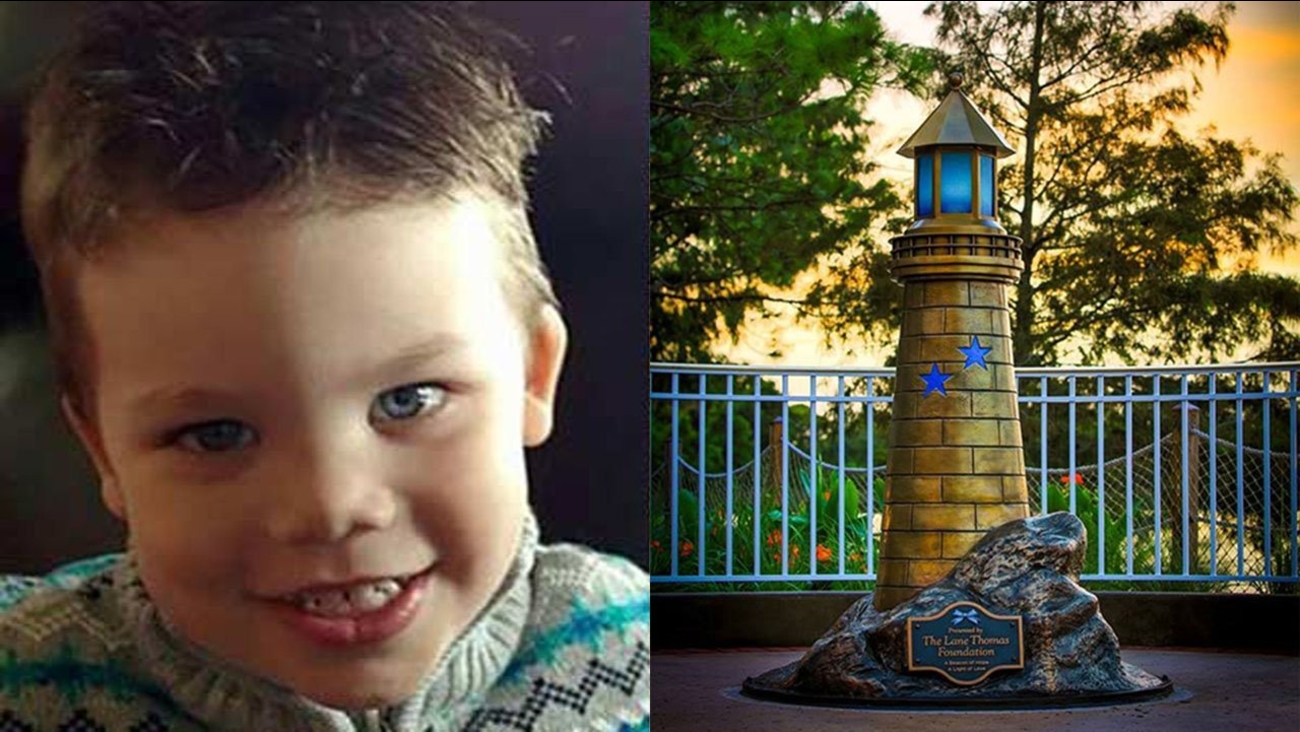 ORLANDO, Fla. -- Lane Thomas Graves, the Nebraska boy who was killed by an alligator while playing near the shoreline of the Seven Seas Lagoon at a Walt Disney World hotel, is now memorialized with a lighthouse sculpture near the site of the attack.

The lighthouse is a symbol of the Omaha-based Lane Thomas Foundation, the nonprofit the boy's family established after his death to support families of children who need organ transplants in Nebraska's largest city.

"We find comfort that so many people continue to remember our sweet boy, Lane, and we believe the lighthouse stands as a beacon of hope and support for families in the depths of despair," his parents, Matt and Melissa, said in a statement.

Disney said it erected the sculpture to spread awareness of the family's foundation.

Lane was playing outside the Grand Floridian Resort and Spa on June 14, 2016, following an outdoor showing of "Zootopia" on the beach outside the hotel. He and other children were building sandcastles, and Lane was collecting water in a bucket. The boy's sister, Emma, was in a playpen 20 to 30 yards from the shoreline.

It was about 9 p.m. -- prime hunting time for alligators -- when Lane waded into ankle-deep water and the alligator snatched him by the head and dragged him underwater. Witnesses tried to save him. Matt Graves attempted to pry the gator's mouth open, but the animal escaped with Lane.

Disney closed its beaches the next day as authorities searched for the alligator and the boy. Lane was found in 6 feet of murky water 10 to 15 yards from the shore, Orange County Sheriff Jerry Demings said at the time.

Wildlife biologist Jeff Corwin told CNN, "That gator came in, grabbed that boy, pulled him, the dad startled that gator, the gator let him go and then the boy drowned."

Disney faced scrutiny on traditional and social media. While there were "no swimming" signs posted at the lagoon, there were no warnings about alligators. Signs at other Walt Disney World bodies of water did caution visitors about alligators and snakes.
Some critics also questioned why alligators were present at a vacation resort popular with children.

Several experts told CNN that the lagoon is connected to a series of canals that feed into larger bodies of water and -- given that Florida is home to 1.3 million alligators -- it would be impossible to keep them out of the resort.

The week after the attack, Disney reopened its beaches with new signage, and the state Fish and Wildlife Conservation Commission announced it was confident it had "removed" the 7- to 8-foot killer reptile from the lagoon.

Though alligators typically avoid humans, an August 2016 report from the state commission concluded that because Lane was bent over at the time of the attack, the animal may have believed he was smaller prey, such as a raccoon, opossum or armadillo.

Disney is the parent company of ABC 7.