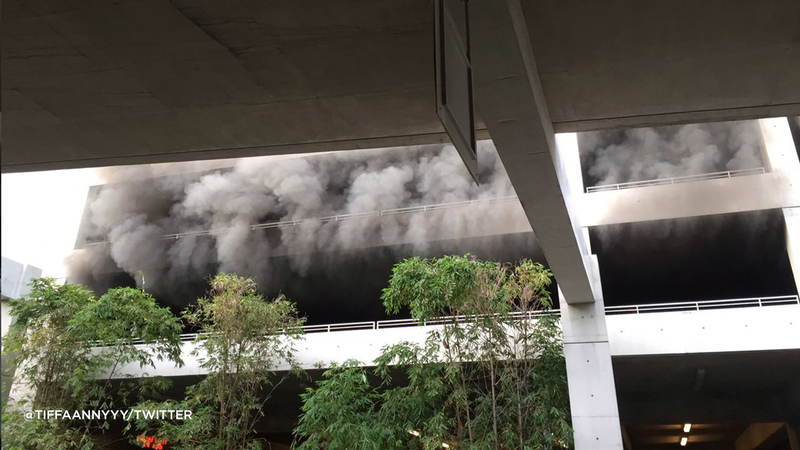 The Anaheim Police Department said nine cars were impacted by the fire at the Mickey and Friends parking structure, which has a capacity of 10,000 vehicles.

Firefighters were called to the scene at about 4:35 p.m. after an Anaheim police officer reported the blaze.

Four vehicles were completely destroyed and four others sustained major damage, authorities said. The damage caused by the blaze was estimated at $180,000.

Authorities announced the two-alarm fire was knocked down at about 5:35 p.m. Officials initially waited for the smoke to clear before allowing guests to return to their vehicles shortly after 7 p.m. Two sections of the second floor remained closed.

Viewers captured smoke billowing from the second floor of the parking garage and shared their images with ABC7 by using #abc7eyewitness on social media.

Multiple cars caught fire at the main parking garage for Disneyland, according to officials.

"As soon as we saw it we turned around because they told us to leave. We didn't notice it at first, but as soon as they told us what it was, we could smell it and we left. It was a little scary for the kids," an eyewitness told ABC7.

Disneyland officials said no vehicles were allowed into the structure in the immediate aftermath of the incident, and guests were being directed to an alternate parking area.

Medics treated seven employees who reportedly suffered from smoke inhalation, according to authorities. Police said the victims suffered non-life threatening injuries and refused to be taken to the hospital.

"I think it was one flight below our car," said Adam Habie of Placentia. "And then we left and they wouldn't let us go to the thing, so decided to stay a little bit longer at Disneyland, have a good time."

The investigation into the cause of the fire was underway, officials stated. Foul play was not suspected as a factor, according to police Sgt. Daron Wyatt.

"It's just an accidental fire that started with one vehicle then quickly communicated to other vehicles," the sergeant said.