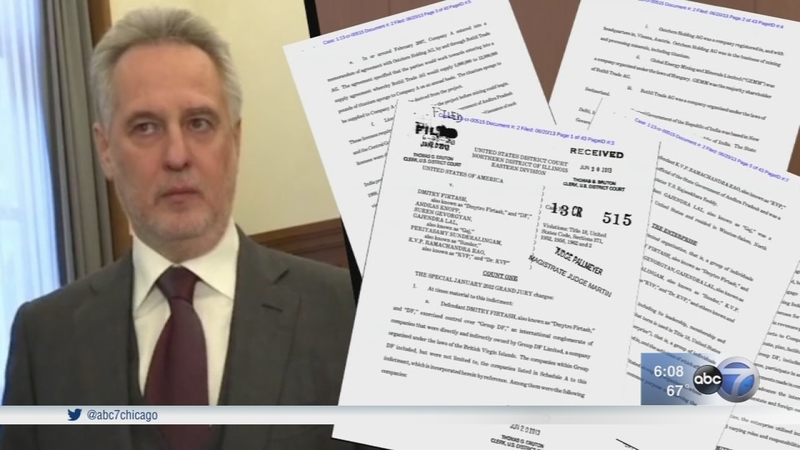 CHICAGO (WLS) -- There has been a hitch in the extradition of a Ukrainian business tycoon to Chicago. Dmitry Firtash, who has been indicted in a Chicago racketeering case, has ties to both President Donald Trump and The Kremlin.

According to justice officials in Austria, Firtash's extradition to Chicago is on hold because Firtash is facing new organized crime charges in Spain.

The Chicago case alleges more than $18 million in payoffs for titanium contracts in India. The metal that was eventually to end up in brand-new 787 Dreamliner aircraft made by Chicago-based Boeing, considered a victim in the case.

He is rich and powerful enough in Ukraine to be known as an oligarch. In a Vienna courtroom, however, he is known as a defendant, fighting extradition to Chicago where he has been under the weight of a federal indictment since 2013.

Finally, on Tuesday, an Austrian appeals court ruled against Firtash and cleared the way for him to be sent to Chicago, subject to routine formal approval by Austria's justice minister.

Then, just after the clock started ticking toward his trip to O'Hare, time stood still-and remains so. With breathtaking speed, the Ukrainian oligarch was arrested while waiting for the elevator to leave court.

Austrian police took him into custody on an outstanding warrant from Spain that accuses him of money laundering and engaging in organized crime. He denies all the charges.

On Wednesday night, Firtash attorney Dan K. Webb, a former U.S. attorney in Chicago, said that the businessman remained behind bars in Vienna, Austria. "I was told earlier today that he is still in jail waiting for a bond hearing that will occur over the next day or so."

His release came Thursday morning. The Land Court of Vienna, having considered Spain's extradition request, released Firtash without additional bond money. He had previously posted bail totaling more than $150 million. However, it appears Mr. Firtash will be staying in Austria until the competing extradition requests are worked out, as he was required to surrender his foreign passport.

That arrest has complicated Firtash's extradition to Chicago. U.S. extradition approval by Austria's Justice Minister Wolfgang Brandstetter is now on ice. Brandstetter says he won't make a decision about the Chicago extradition until Austrian courts have dealt with the Spanish warrant.

It is the latest legal pothole for Firtash, who had business ties with Paul Manafort, who managed President Trump's campaign last year. The men faced a federal civil racketeering suit alleging a New York hotel they planned to build was a facade for money laundering. A U.S. federal judge dismissed the suit in 2014.

Firtash's attorneys say he will be cleared of all charges in Chicago and declined to comment on the newly-executed Spanish arrest warrant. His U.S. legal team says it is "disappointed" in the extradition decision and is prepared to fight the charges in Chicago.