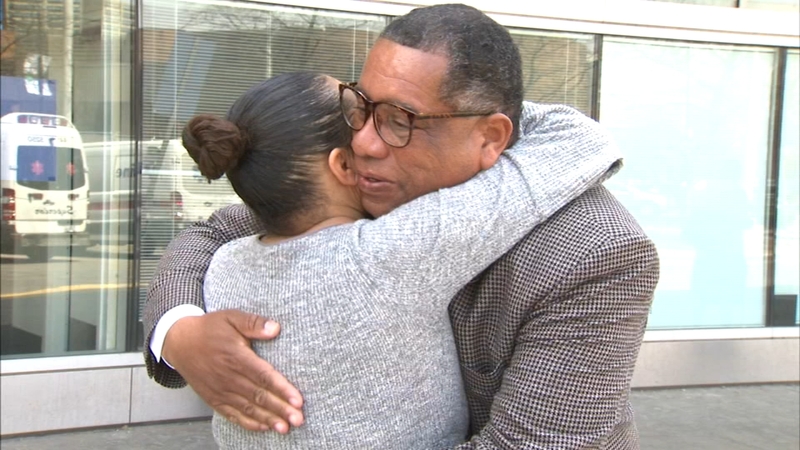 CHICAGO (WLS) -- Doctors are trying to save the right leg of a 68-year-old woman who was attacked by two dogs Monday evening in the city's West Woodlawn neighborhood, according to her daughter.

Officers responded to a report of vicious animals in the 6500-block of South Evans Avenue around 7:30 p.m. Monday. There they found a woman being attacked by two dogs. Though earlier reports said the dogs were pit bulls, Chicago Animal Care and Control said Tuesday afternoon that one is a mastiff mix and the other is a Staffordshire terrier mix.

A 68-year-old woman was seriously injured when she was attacked by two dogs Monday evening in West Woodlawn.

Greg Mallette was driving by and stepped in to try to save the woman, who was identified Tuesday as Marion Fowler.

"So I spun my car around and blew my horn as I was gravitating toward her and the dogs did not budge. You know, with horns blaring usually they would run off. And the police came in the same way with the horns blaring, those dogs never budged," Mallette said.

The victim's daughter Alicia said her mother was mauled horribly on both legs and her arm. Doctors are working to save her right leg.

"She is in serious condition. They have to do another surgery. But she's awake," Alicia said.

Alicia and Mallette met for the first time Tuesday, sharing a hug between two strangers now bound together by tragedy.

"Your mom, she never relented, and those dogs they never broke away," Mallette told her.

"I just hate that I couldn't get enough clearance to do something else," he added, "because of the possibility of hurting her."

Marion is from Nashville, Tennessee, and Alicia is in from California. Chicago has been their home for the last seven weeks as they tended to an ailing cousin, who died on Sunday.

Still, Alicia said, they don't hold it against the city.

Chicago police said no arrests have been made and there appear to be no ownership records for the dogs. The dogs are currently in the custody of animal control.