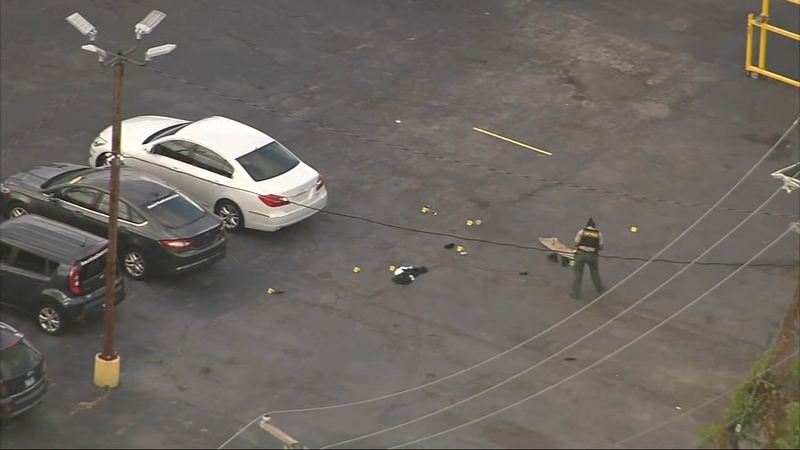 DOLTON, Ill. (WLS) -- A police officer in south suburban Dolton was injured Monday while responding to an armed robbery, the mayor said.

Dolton Mayor Riley Rogers said the officer was responding to a call of an armed robbery at a used car dealership in the 500-block of East Sibley Boulevard around 1:30 p.m. Dealership employees told police two suspects came into their business, announced a robbery, and took a wallet and gun from the manager of the dealership.

When the officer arrived, he saw two 19-year-old suspects leaving the scene and engaged them in a gun battle, the mayor said.

"Everybody stopped and froze," said witness Kenetta Biles. We didn't know what to do, if we should run, hide or what we should do. And then we start seeing the helicopters and the police, we're like something serious."

The officer, who is described as a veteran with about 20 years on the force, dislocated his shoulder while ducking for cover during the shootout, officials said. He is being treated at a local hospital and is in good condition.

One of the suspects was shot in the thigh and taken to University of Chicago hospital in serious condition.

"One of the offenders was shot in the upper thigh. He's hospitalized now. Our officer was taken to the hospital with a minor injury, said Mayor Rogers.

The other suspect escaped.

Police said they have called off their large-scale search for the second suspect, and believe he has left the perimeter. The search continues with patrol units. Police said they found a black ski mask and hoodie, likely connected to the suspect, discarded about half a mile north of the crime scene.

"If you have to go to your garage, please have someone go to that garage with you because this offender is still armed and still dangerous. He hasn't been apprehended yet," said Andrew Holmes, Village of Dolton Trustee.