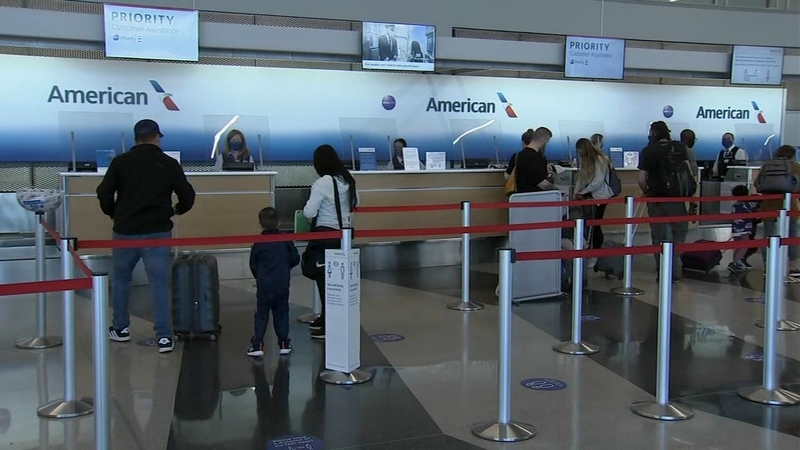 CHICAGO (WLS) -- President Donald Trump sent shockwaves through the nation and stock markets into freefall Tuesday when he tweeted he had instructed Republicans to stop negotiating a second stimulus package in the House, delaying any COVID-19 relief until after the election.

Wednesday Trump seemed to backtrack, calling for standalone stimulus bills to be passed, trying to salvage a few priority items lost in the rubble of COVID-19 relief talks that he blew up, pressing for $1,200 stimulus checks and new aid for airlines and other businesses hard hit by the pandemic.

In a series of tweets, Trump pressed for passage of these chunks of assistance, an about-face from his abrupt and puzzling move Tuesday afternoon to abandon talks with a longtime rival, House Speaker Nancy Pelosi. The California Democrat has rejected such piecemeal entreaties all along. But Pelosi did talk with Treasury Secretary Steven Mnuchin Wednesday evening, her spokesman said, about stand-alone airline rescue legislation as the industry is shedding tens of thousands of jobs.

Trump's tweets amounted to him demanding his way in negotiations that he himself had ended.

Meanwhile, actual workers and businesses in Chicago and around the nation, depending on more stimulus funds to keep afloat, are left in a scared and stressful state of limbo.

"It's been rough, it's been like a roller coaster," said Cory Ostrowski, furloughed flight attendant. "I'm just ready for it to be over."

United and American airlines have reportedly furloughed 32,000 workers. Ostrowski said he's been watching the news and staying connected to his fellow furloughed workers to see if a congressional aid package gets approved.

"Just hoping to get, within the next few days we can get something that's going to keep us on payroll with health benefits for at least six more months. Then we'll see where we're at," he said.

"We need this help now," said chef and restauranteur Rick Bayless. "We need some type of assistance just to get us through."

Bayless said with capacity only at 40% indoors and winter closing in on outdoor dining, federal aid to states and cities will have an impact on small businesses, their employees and all our communities.

"If we could hire them back and the government could help us pay them, then they could get off unemployment and I think we could make it through spring time," Bayless said. "I'm waiting on the miracle. The miracle could come. Without it, you're going to see a real change in the neighborhood."

Trump Wednesday called on Congress to send him a "Stand Alone Bill for Stimulus Checks ($1,200)" - a reference to a preelection batch of direct payments to most Americans that had been a central piece of negotiations between Pelosi and the White House.

"I am ready to sign right now. Are you listening Nancy?" Trump said on Twitter on Tuesday evening. He also urged Congress to immediately approve $25 billion for airlines and $135 billion for the Paycheck Protection Program to help small businesses.

The stock market fell precipitously after Trump pulled the plug on the talks but was recovering Wednesday after he floated the idea of piecemeal aid.

Trump's withdrawal from the talks came immediately after he spoke with GOP leaders in Congress. Many Republican senators had signaled they would not be willing to go along with any measure that topped $1 trillion, and GOP aides had been privately dismissive of the prospects for a deal. Any Pelosi-sponsored agreement of close to $2 trillion raised the potential of a GOP revolt if such a plan came to a vote.