Trump is Time magazine's Person of the Year 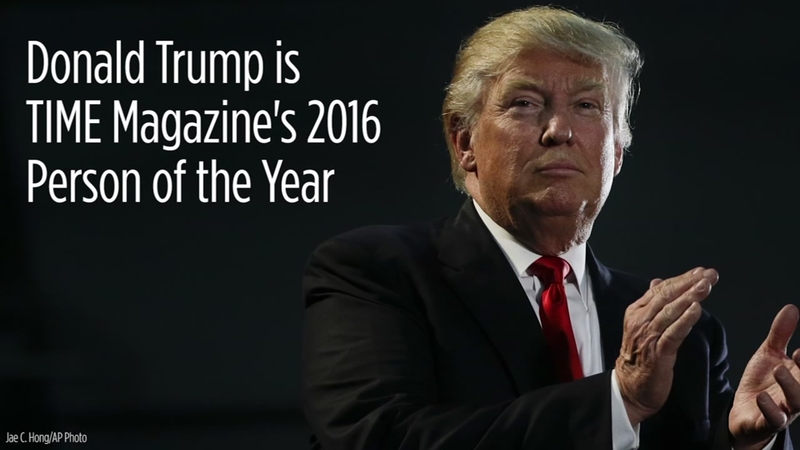 Donald Trump is TIME's Person of the Year

"It's a great honor. It means a lot," Trump said in a telephone interview on NBC's "Today" show.

Time editor Nancy Gibbs said on the program that Democrat Hillary Clinton was the No. 2 finalist. Gibbs said the choice of Trump this year was "straightforward."

"When have we ever seen a single individual who has so defied expectations, broken the rules, violated norms, beaten not one but two political parties on the way to winning an election that he entered with 100-to-1 odds against him?" Gibbs said.

The Time cover reads, "Donald Trump: President of the Divided States of America" and the cover image features a photograph of the president-elect sitting in his private residence at Trump Tower.

In the NBC interview, Trump took issue with the "Divided States of America" description: "I didn't divide 'em," he said. "We're going to put it back together and we're going to have a country that's very well-healed."

Gibbs said Time gives the title to the person who has had the greatest influence on events "for better or worse."

Trump went from fiery underdog in the race for the GOP presidential nomination to defeating Clinton in the Nov. 8 election. Trump won 306 electoral votes, easily enough to make him president when the electors meet on Dec. 19. Clinton won the popular vote.

Gibbs said Clinton "came closer than any woman ever has to winning the White House, and in the process revealed, I think, both the opportunities and the obstacles that women face in the public square."

The No.3 finalized for the Person of the Year was "The Hackers," which Gibbs said referred to "a new cyber security threat we saw this year of state-sponsored hackers looking to delegitimize an American election." She said this was "something new this year and something very disturbing."
Related topics:
donald trumpu.s. & world
Copyright © 2022 by The Associated Press. All Rights Reserved.
TOP STORIES
Security guard hurt after confrontation at suburban Walmart: police
Security guard shoots man in buttocks at Millennium Park
Chicago mass shooting victim ID'd as father of 2, with twins on way
'Absolutely terrified' teen boy dies hours after 'sextortion' scam
Chicago police warn of robberies on Near North Side
Some peanut butter recalled for potential salmonella
At least 1 dead, 44 injured after tornado strikes northern Michigan
Show More
First formula flights from Europe to arrive this weekend
3 wounded in separate shootings on South Side, Chicago police say
9 shot, 2 fatally, on Near North Side
Dog battles mountain lion to save owner's life
Roz Varon's Weekender Report
More TOP STORIES News