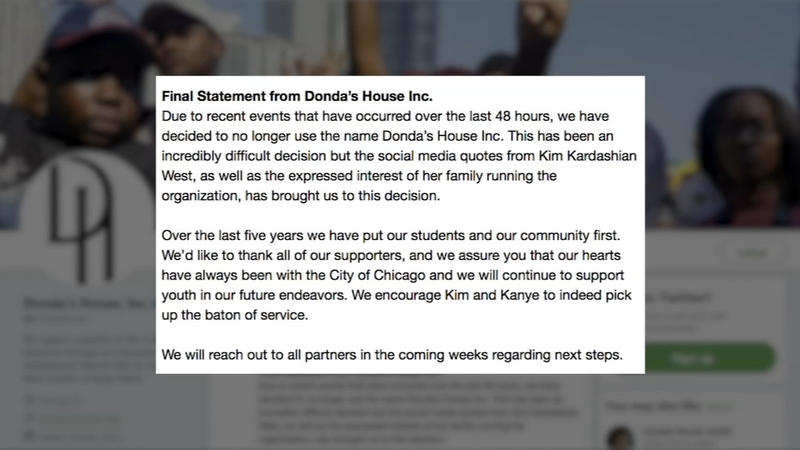 CHICAGO (WLS) -- Donda's House in Chicago is changing its name, but says its mission is the same.

The non-profit, named after Kanye West's mother, released a statement late Saturday night announcing the name change as a result of a series of tweets from Kim Kardashian West.

She threatened to take the organization away from one of its co-founders, Chicago artist Rhymefest, saying, "You better believe I will make it my mission to take Donda's House from you and let my children run it the way it should be run! @RHYMEFEST"

U haven’t been right since u got kicked out of the studio in Hawaii wearing fake Yeezy’s @RHYMEFEST 😂 You’re over levergenging Kanye’s name & asked Kanye to donate money to u so stop w your fake community politics & lies. Truth is you haven’t been able to sustain the foundation

You better believe I will make it my mission to take Donda’s House from you and let my children run it the way it should be run! @RHYMEFEST

Sorry to all of my followers for flooding my timeline I know you have no idea who Rhymefest is.

Rhymefest posted a statement on Twitter in response to Kardashian-West saying in part, "How can you criticize an organization you've never been to OR that you've never even talked to the Executive Director or any of the team...I actually knew and was mentored by Dr. Donda West personally and have met and spoke to hundreds of her students and mentees who not only support the work that we are doing in Chicago, but compel it. "

Hey @KimKardashian good to hear from you. Here’s my response pic.twitter.com/dWvwZfr1b5

So far, there's been no word from Kanye about this fallout.