You don't have to be a vegan, vegetarian to enjoy this Southern Indian dish at Art of Dosa in Revival Food Hall

WLS
By Steve Dolinsky
CHICAGO (WLS) -- The dosa is an ancient dish found throughout Southern India; a perfect meal for anyone vegetarian, vegan or gluten-free. Up until recently, you'd have to travel to an Indian restaurant that specialized in them in order to try one, but ABC7 Chicago's Hungry Hound says there's now a great option in a Loop food hall.

Some studies suggest a dosa is eaten nearly a billion times a day in India, yet in America, very few people outside of the Indian communities know about them. An Indian American cook who grew up eating them as a child, has been spreading the gospel the past couple of months, and you don't have to be vegan or vegetarian to appreciate them.

You may not have seen a dosa before, but for Ravi Nagubadi, they are one of his oldest childhood memories.

"A dosa is a South Indian fermented rice and lentil crepe," said Nagubadi. "I've been eating dosas since I was born practically."

In Steve's Extra Course Video, he takes a look at the dairy-free mango lassi they make at Art of Dosa.

Nagubadi opened Art of Dosa a few months ago inside the Revival Food Hall, with his mom playing a large role. The recipe for the dosa batter is essentially rice and lentils, which have to be evenly spread over a crepe griddle. Oil is applied, the excess batter is smoothed out, and then the fillings are added.

"Traditionally we serve a potato curry, a sambar, which is a lentil vegetable soup and a coconut chutney," he said.

In addition to the chutneys, an assortment of homemade spice blends they call "gunpowder."

"The orange one is coconut red chili base," he said.

There is also a green one with roasted serranos and curry leaves, and a black one with dark roasted red chilies.

"Each one of them has 15-plus spices and flavors so they're not only just heat like the gunpowder name suggests. They're very explosive in flavor," said Nagubadi.

Besides the baseline potato curry, they offer a range of proteins - all plant-based - with flavors like buffalo, which mimics that buffalo wing flavor, or Japanese ramen.

"The soy protein that we use is flavored with a Japanese barbecue katsu and we add kimchi and a vegan sriracha mayo and some gluten-free ramen noodles," he said.

The dosa is folded in half, rolled up and then cut in two for easy eating. You can also get a plain dosa that's hollow, with curries on the side.

Nagubadi said his staff definitely has to do more explaining than the other vendors in the food hall, but he's happy to educate newcomers about his favorite Indian snack.

"We love explaining it," he said.

In Steve's Extra Course Video, he takes a look at the dairy-free mango lassi they make at Art of Dosa. 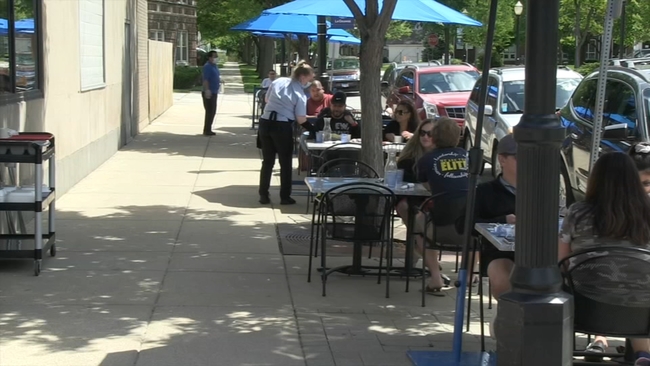