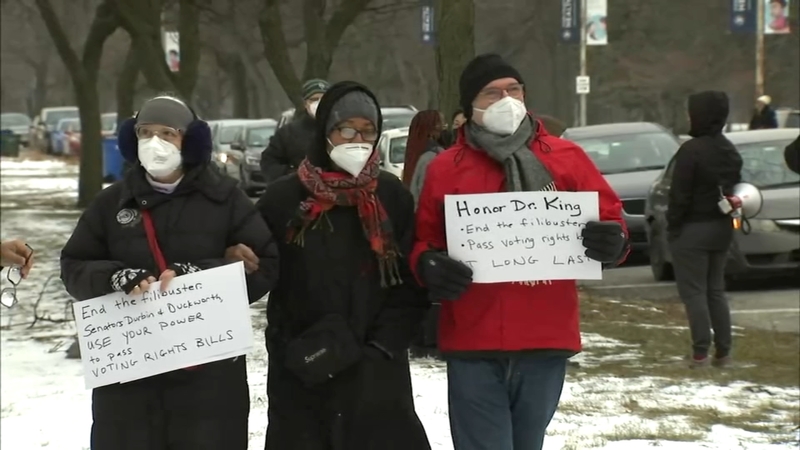 CHICAGO (WLS) -- Dozens of cars took part in a caravan in Chicago as part of a protest on Martin Luther King Jr. Day.

The group is rallying leaders to pass voting legislation which they believe it's pivotal in the fight for equal voting rights.

Members of the "Chicago Coalition" gathered this morning at the corner of 51st Street and King Drive to throw their support for the new Freedom to Vote Act. It would create a national standard for voting access, like enabling early voting two weeks prior to Election Day and allow voters to return mail-in ballots in-person to a polling place or dropbox and more.

Since the 2020 election, 19 states have passed 34 bills tightening voting rules, including shortening the window for mail-in voting and imposing tougher ID requirements.

In a 50-50 Senate, Democrats Joe Manchin of West Virginia and Kyrsten Sinema of Arizona oppose changing filibuster rules to pass a law they say they otherwise support. What's being called the "John Lewis law" would establish federal standards for voting access, and make Election Day a holiday.

"The Democratic Party has done a poor job in terms of making this a priority for our nation," said Rev. Otis Moss, Trinity United Church of God, Chicago.

Moss, along with pastoral colleagues across the country, is now on day 10 of a hunger strike. He wants to pressure lawmakers to do what he calls "the right thing."

"I am willing to put my life on the line for this nation and democracy," Moss said. "Not really for what is happening now, but for future generations."

Now, there is mounting pressure on President Biden to ensure voter access to ballots before the November mid-term elections. He is urging lawmakers to move forward and pass the legislation.