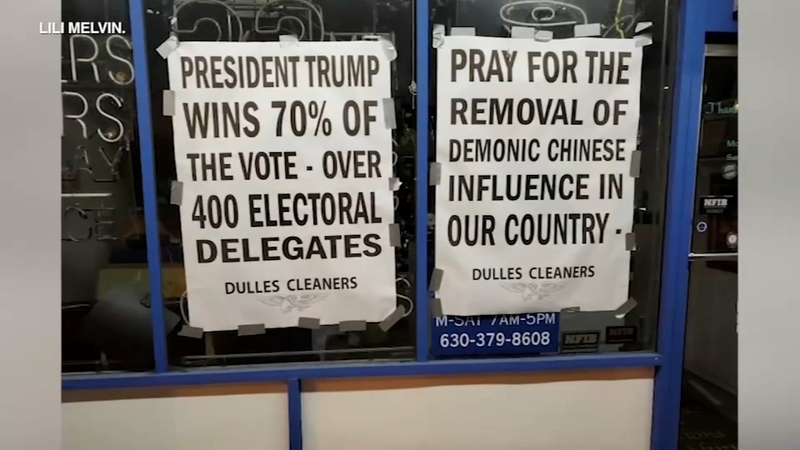 ELMHURST, Ill. (WLS) -- A protest is planned for the weekend after a racist anti-Asian sign put up in the window of an Elmhurst business went viral. Now, the business owner and Asian-Americans in the west suburban community are speaking out.

"I did, like, cry and kinda break down because I just didn't know that my town and people could have thought that something like that was OK to put up," said Elmhurst resident Lili Melvin.

Melvin, a 21-year-old Asian American, said she can no longer stay silent after a racist, anti-Asian sign posted in the window at Dulles Cleaners in downtown Elmhurst went viral this week.

"It was just like utterly shocking to me. Just was very upsetting and I didn't really know what to feel in that moment," she said.

Dulles Cleaners owner John Dulles said the sign that called Chinese people "demonic" has been down for five months, taken down after Melvin and her mom Teri Litavsky confronted him in person.

"I'm not a racist. The sign, I made a mistake five months ago and instead of saying Chinese government I said Chinese people. That was a mistake, I admitted that, I took the sign down five months ago," Dulles said.

Now, a new sign with an attempted apology is up in its place after pictures of the original resurfaced online this week.

"Someone is trying to smear me and make me look like a racist," Dulles said. "When that lady and her daughter came in, I said, 'OK, I'm taking the sign down.' I tore it down, put it in the garbage."

"So you wrote it, you read it, you printed it, you hung it, but you didn't mean it? Yeah, I don't buy that," said Teri Litavsky.

Litavsky adopted her daughter Lili from China when she was two years old.

"It's not acceptable today, tomorrow, anywhere anytime, but here, I never thought I'd have to be doing this for my daughter," she said.

"It was amazing to just go in and confront him, and tell him how I felt," Melvin said. "Even if he didn't apologize to me, I wanted him to know and see my face and how I reacted to that."

There is a peaceful protest planned outside of Dulles Cleaners in Elmhurst on Saturday from 11 a.m. to noon.

The Elmhurst Chamber of Commerce and Industry issued this statement about Dulles Cleaners:

"First, Dulles Cleaners is not a member of the Elmhurst Chamber of Commerce and Industry and the business owners' anti-Asian signage stands against the inclusive beliefs of our Chamber and the Elmhurst community. ECCI tries to lead by example-joining and supporting community organizations such both Respect Elmhurst and Elmhurst Pride Collective-and condemns all form of racism, sexism, ageism and the like. While ECCI has no authority to supervise the actions of individual businesses and their owners, consumers can opt to voice their opinions economically by choosing whom to patronize or not."
Report a correction or typo
Related topics:
businesselmhurstprotestracismasian american
Copyright © 2021 WLS-TV. All Rights Reserved.
TOP STORIES
Long haul COVID in kids produces little-understood lingering effects
2 Simeon HS students killed in separate shootings
Oak Lawn woman wanted after skipping court over 'Maderna' vaccine card
High waves up to 18 feet slam Lake Michigan shoreline
'No one would be spared': Debt default would set off dire consequences
FDA backs Pfizer COVID-19 boosters for seniors, high-risk
Lightfoot 'not happy' with nearly 10K CPS students in quarantine
Show More
Chicago Weather: Chilly, breezy Thursday
Melvin Van Peebles, godfather of Black cinema, dies at 89
Missing persons of color: Do they get the same attention?
Little Village Aztec dance group carries on 500-year tradition
Rev. Jackson released from rehab facility after COVID-19 battle
More TOP STORIES News