After losing ear, Army soldier grows a new one in her forearm, gets transplant 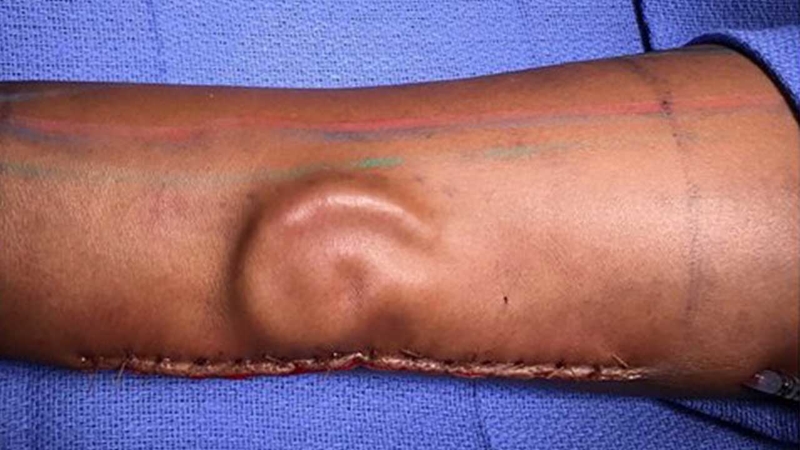 Army soldier gets ear grown inside arm for transplant

EL PASO, Texas -- Two years after losing her left ear in a car accident, 21-year-old Pvt. Shamika Burrage has a new ear grown inside her forearm from her own cartilage.

"I was going to go with the prosthetic to avoid more scarring, but I wanted a real ear," Burrage told the Army. "I was just scared at first but wanted to see what he could do."

The soldier lost her left ear in a 2016 car accident while returning to Fort Bliss, Texas, after visiting family. Burrage and her cousin were both in the car when their tire blew out, sending the car off the road.

"I hit the brake. I remember looking at my cousin who was in the passenger seat. I looked back at the road as I hit the brakes," she said. "I just remember the first flip and that was it."

The car skidded 700 feet and flipped several times, according to the Army press release. Burrage was ejected.

In addition to losing her ear, she suffered head injuries and compression fractures in the spine. Doctors later told her that if she had received medical attention 30 minutes later, she could have died.

Burrage's cousin, who was eight months pregnant, escaped with only minor injuries.

Months later, it was time to discuss whether Burrage would get an artificial replacement or undergo a reconstruction. Lt. Col. Owen Johnson III, the head of plastic and reconstructive surgery at William Beaumont Army Medical Center, weighed in.

"She was 19 and healthy and had her whole life ahead of her," said Johnson. "Why should she have to deal with having an artificial ear for the rest of her life?"

Burrage herself said she was hesitant at first but ultimately decided on the reconstruction.

The doctors harvested cartilage from her ribs and carved out an ear, which was placed under the skin of her arm so it could grow.

"[The ear] will have fresh arteries fresh veins and even a fresh nerve so she'll be able to feel it," Johnson said. "The whole goal is by the time she's done with all this, it looks good, it's sensate, and in five years if somebody doesn't know her they won't notice."

The transplant was recently successful and now Burrage has just two surgeries left.

Johnson said Burrage was a great candidate for this revolutionary surgery, which was the first of its kind in the Army.