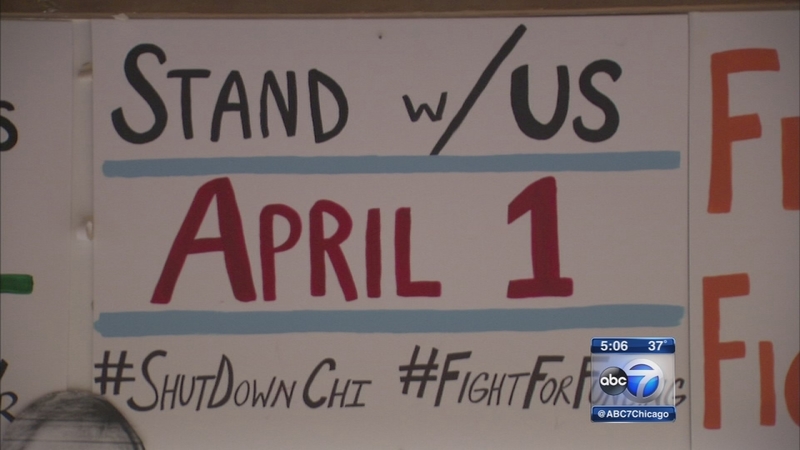 CHICAGO (WLS) -- Chicago Public Schools and the Chicago Teachers Union will head back to the bargaining table Thursday, a day after union members approved a one-day walkout.

Teachers are protesting unfair labor practices, though their contract is also under negotiation. An overwhelming majority, 486 union delegates, voted in favor of the April 1 walkout. Only 124 voted against it. Among those, CTU President Karen Lewis said many wanted a full-blown strike.

"They feel like, 'Why don't we just do it now? Do a real strike now and be done with it.' My goal is teachers should be in the classroom teaching our kids and the kids should be at their desks, and the other adults in the conference room at the negotiations," Lewis said.

Teachers can't engage in a full-time strike until May 16 - a month after the scheduled release of a fact-finders' report.

As the union prepares for their walkout, Chicago Public Schools are telling parents to prepare for no school next Friday and working to provide staffed sites for students to go on April 1. At the same time, CPS is encouraging teachers who voted no on the walkout to report for work and get paid.

Union leaders say the "day of action" is the best option the union has to pressure state government to come up with a funding plan for schools.

Community and labor groups spent Thursday morning making protest signs for the walkout. They will petition city and state government to come up with a responsible and supportive spending plan for Chicago's schools. Not only has Springfield failed to agree on a state budget, but the city teacher's union has also been without a contract for nearly a year. The CTU is framing their walk out as a day to call attention to school funding

"Will it be a hardship, a small hardship on people whose students go to public school? Yes, including me, my own children go to public school. It will be a much worse hardship if we don't address the underlying crisis," CTU Vice President Jesse Sharkey said.

Other unions, including University teachers and CTA bus drivers, are joining the CTU on April 1, although not all are encouraging their members to walk off their jobs. And while CTU calls it a one-day strike, CPS says it is not a legal one so teachers who do not come to work will not be paid.

"This illegal strike is really a shame because we believe it plays into Governor Rauner's narrative as to why he wants to bankrupt the schools and take over," said CPS CEO Forrest Claypool.

The school district and parents are scrambling to find alternate care arrangements for hundreds of thousands of students. CPS is preparing 250 contingency sites such as school buildings, libraries and Park District facilities to be staffed and available for students whose parents cannot make alternative arrangements.

"We ask if parents have another option that they exercise that option," said CPS Chief Education Officer Janice Jackson. "However, we know it is our responsibility to make sure there is a place that provides a safe and orderly environment."

Teachers said they know the walkout will be disruptive, but Union President Karen Lewis said waiting until May will be too late.

Students are already missing school Friday, for the first of three unpaid teacher furlough days. Some parents at Mark Sheridan Elementary School plan to use the time to clean up the playground and plant, although Vincent Johnson says he would rather have his kids in school.

"Parents don't get a sick day, and I think both of the parties involved, you know CTU and CPS, maybe need to act like adults and realize that calling in sick is not going to solve problems," Johnson said.

Claypool says Good Friday was selected as a furlough day because thousands of teachers and staff had already planned to take the day off as a holiday.

The CTU says choosing to walk out on a work day shows a higher degree of commitment and urgency.

Both sides are scheduled to negotiate Thursday to try to avoid the walkout.