WLS
By Eric Horng
CHICAGO (WLS) -- There is a new strike threat from the Chicago Teachers Union following a proposed budget from Chicago Public Schools that is based on their union accepting a contract similar to one its members rejected earlier in 2016.

Flanked by members of the rank and file, CTU president Karen Lewis was blunt in a press conference.

"If the Board of Education imposes a 7 percent slash in our salaries, we will move to strike," Lewis said.

CPS's new proposed budget aims to resolve a deficit of more than a $1 billion. In addition to deep cuts in spending, new state aid and a property tax hike, the budget calls for teachers to pay more for their pensions.

"The state stepped up. Our local taxpayers stepped up. CPS has stepped up. We need the teachers to be part of the solution to protect their own jobs and pensions, but also to protect our kids and to show good faith to those hard-working taxpayers who are sacrificing for them and our schools," Claypool said in a press conference Monday.

But that 7 percent pension pickup has already been rejected by the union's large bargaining team.

"Do not force our hand," Lewis warned.

In Ravenswood, parents of CPS students were not happy to learn of the latest war of words between CPS and CTU.

"It's extremely frustrating, and I think that's why you're hearing many people leaving the city or leaving just the public school system altogether," said Renee Girardin, whose child is a CPS student. 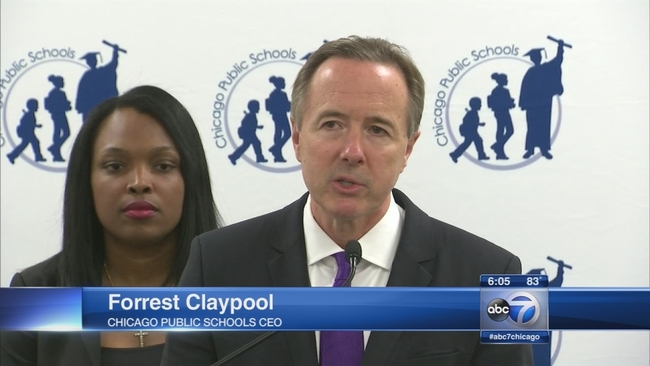