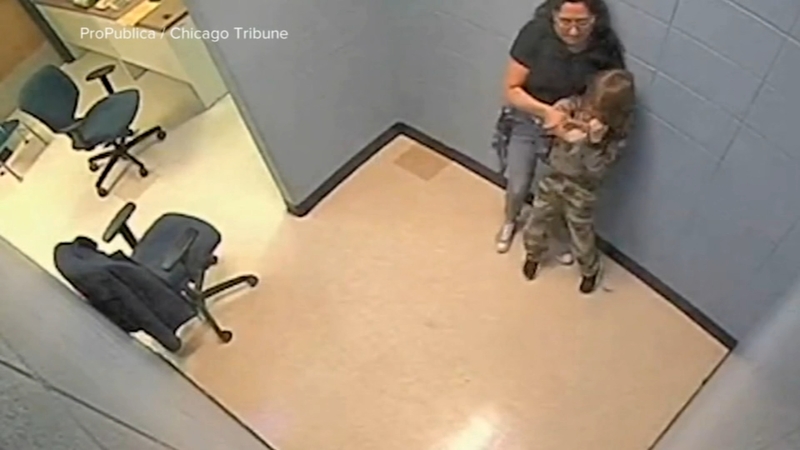 CHICAGO (WLS) -- Some Illinois lawmakers are calling for the end of the practice of solitary confinement and the use of restraints at public and private schools in the state.

A hearing on the practices was held Tuesday following a report by the Chicago Tribune and ProPublica Illinois into the misuse of isolation and physical restraints as a form of discipline. The report found the practices had an adverse effect on children.

Joe Magyar demonstrated how he was restrained by two school administrators when he was 16 years old at a special education private school in the suburbs: arms spread wide, pinned up against a wall.

"Eventually they got tired and they had another member and they would alternate who was holding me," he said.

Maygar told his story to lawmakers who have introduced a bill to stop the practice of secluding children in isolated rooms as a form of discipline at any public or private school. During the hearing a video was shown of a 7-year-old being restrained by a school staff member in an isolate room at a Lake County school for students with special needs.

"To me, it was horrifying that the practice was still going on," said State Rep. Jonathan Carroll (D-Northbrook). "It's horrible we treat children with special needs the same way we treat them hardened criminals."

The horrifying practice hits home for Carroll. Diagnosed with ADHD, he has vivid memories of being punished in fourth grade with isolation.

"We were threatened with isolation, it was like, 'If you don't stop you're going in the room,'" he recalled. "What was the room? It was a room with padded walls, a little door with glass on it."

Despite his experience, Carroll does not support a complete ban on seclusion. He said it should only be used for therapeutic purposes, not punishment.