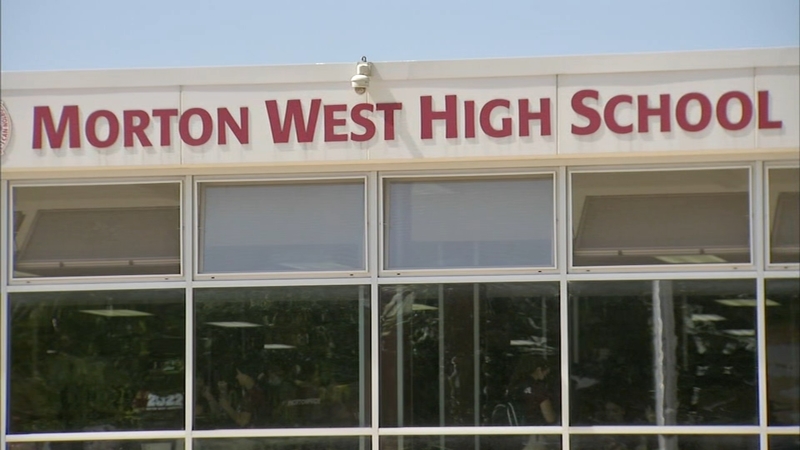 BERWYN, Ill. (WLS) -- There are reports that some suburban Berwyn students have gotten sick from heat exhaustion at Morton West High School. Parents claimed that on one of the hottest days of the season, there was no air conditioning in their students' classrooms.

Even as temperatures boiled outside, students at Morton West High School said it was even worse inside. While the building's newer wing has air conditioning, they said the main wing does not.

"This kid was sitting on the floor in front of the fan and they told him to go sit in his seat. And when he got up, he passed out," said Haley Matos, a sophomore at Morton West. "I had to call my mom and let her know I was getting very light-headed, to the point I could pass out and I felt like I was going to throw up and everything because of the heat."

"He was throwing up. He was just overheated," Serena Matos said. "The nurse said she had to put an ice pack on his chest and neck and he was just still overheated."

Parents said that besides not having air conditioning, many classrooms don't have fans. They added that the school is overcrowded, especially during passing periods, which could be seen on cellphone video shot by one of the students.

"He messaged me, 'Mom, I can't take it. Come pick me up. I know I'm going to pass out,'" parent Rosie Juarez said. "So on Tuesday there was a huge line of parents picking their kids up as well because of the heat in the school."

A majority of instructional spaces at Morton West have air conditioning. The school implements several additional strategies to address the heat in the building, including:

- Relieve hallway traffic by redirection and promoting routes throughout the building to minimize congestion.
- Classrooms are released in waves to minimize crowding during passing periods.

A majority of instructional spaces at Morton West have air conditioning. The school implements several additional strategies to address the heat in the building, including a cooling plan to relocate classes to air-conditioned spaces throughout the school day.

For the sophomore class, the entire last week has been a bit of a shock. Because of the pandemic, this is the first experience they've had inside Morton West's building.

"It's kind of sad because I wanted to come back, but now I feel if it's better if we stay at home," Haley Matos said.