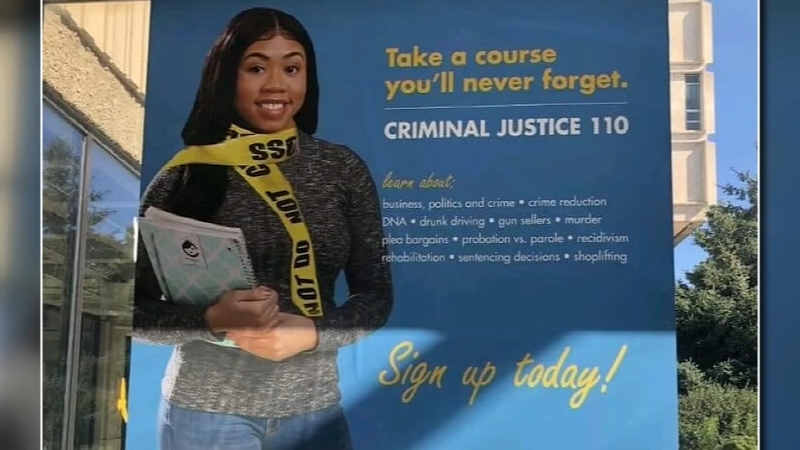 MILWAUKEE, Wis. -- The University Of Wisconsin-Milwaukee has decided to take down a controversial poster.

The poster in question included a photo that features an African-American criminal justice student with crime scene tape wrapped around her neck.

The campaign prompted some discussion online.

Some said it was offensive, and others called for the university to remove it.

"It just seems like sometimes there is not someone in the room saying like, 'Hey maybe we should think about this for like just an extra second,'" said one student.

The university has opted to remove the posters after online backlash urged people to contact the school.

Some people also said they felt it had racial overtones.

"A person of color with crime tape rolled around their neck. It gives you a certain other thought," said the student.

"This would make me want to take a criminal justice class," added another.

Others said it's not a big deal.

"I personally don't see a big issue with it. She did volunteer to do it," voiced one student.

In a statement the university apologizes saying in part, "the series includes different races and ethnicities," and that the "police tape was used as a prop in an effort to add interest to the photos."

The school added it wasn't their "intent to offend or diminish the impact of violence in the community."

After some of the discussion online about the controversial posters the University of Wisconsin Milwaukee said that they've taken down those posters. Students said they're happy concerns are being listened to.o

"Just having a more community dialogue student dialogue or having some kind of way to have feedback on certain promotions such as this," said one person.

"You just you bring people of different backgrounds in and say 'OK what is this poster look like to you,' and get their feedback. That's all it takes," suggested one person.

The University Of Wisconsin Milwaukee apologized, and said the students it worked with on the ad agreed with the approach.
Report a correction or typo
Related topics:
educationwisconsinsocial mediacontroversial art
More Videos
From CNN Newsource affiliates
TOP STORIES