Guzman was named in a 17-count indictment accusing him of running a continuing criminal enterprise responsible for importing and distributing narcotics, conspiring to murder rivals, firearm violations and money laundering.

Guzman entered the court wearing navy blue scrubs and sneakers and was not visibly cuffed or shackled. He had two federal public defenders, Michael Schneider and Michelle Gelernt, and a translator.

His next court appearance is February 3. His trail must start 70 days following that appearance.

Saying they were bringing the world's most notorious drug lord to justice, U.S. prosecutors on Friday described El Chapo as the murderous architect of a 3-decade-long web of violence, corruption and drug addiction and announced they were seeking a $14 billion forfeiture from him.

Guzman was extradited from Mexico on Thursday. Prosecutors have sought to bring him to a U.S. court for years while he made brazen prison escapes and spent years on the run in Mexico.

"Today marks a milestone in our pursuit of Chapo Guzman," said Robert Capers, the U.S. attorney in Brooklyn. "He's a man known for a life of crime, violence, death and destruction, and now he'll have to answer for that."

As boss of the Sinaloa cartel, Guzman presided over a syndicate that shipped tons of heroin and cocaine to the U.S., using tanker trucks, planes with secret landing strips, container ships, speedboats and even submarines, prosecutors said. Perhaps most famously, Guzman's cartel built elaborate tunnels under the U.S. border to transport drugs, said Wifredo Ferrer, the U.S. attorney in Miami.

The cartel made billions of dollars in profits - prosecutors are seeking a $14 billion forfeiture - and employed hit men who carried out murders, kidnappings and acts of torture, according to prosecutors. And the Sinaloa smugglers also helped fuel an epidemic of drug abuse in the U.S. in the 1980s and '90s, the prosecutors said.

His lawyers in Mexico called his extradition, which he had fought, a political move to distract from gasoline protests there.

The Drug Enforcement Administration flew him to New York from the Mexican border city of Ciudad Juarez on Thursday - hours before the inauguration of President-elect Donald Trump, who has lashed out at Mexico.

The U.S. has been trying to get Guzman in a U.S. court since he was first indicted in California in the early 1990s. Now in his late 50s, he faces the possibility of life in a U.S. prison. Prosecutors had to agree to not seek the death penalty as a condition of the extradition.

While he faces federal charges in several U.S. states, federal prosecutors in Brooklyn won the jockeying to get the case. The U.S. attorney's office there has substantial experience prosecuting international drug cartel cases and was once led by outgoing U.S. Attorney General Loretta Lynch.

Guzman was recaptured a year ago in Mexico after escaping from a maximum-security prison for a second time. The episode was highly embarrassing for President Enrique Pena Nieto's government, and Mexican officials were seen as eager to hand him off to the U.S.

Mexico's Foreign Relations Department said a court had ruled against Guzman's appeal and found that his extradition would be constitutional.

The extradition came at a charged political moment in the U.S. Trump has criticized Mexico for sending the U.S. "criminals and rapists" and vowed to build a wall at the Mexican border and have Mexico pay for it. Mexican officials have said they wouldn't pay for such a structure.

U.S. officials said they didn't learn until Thursday that Mexico was extraditing Guzman. Thanking the Mexican government for its work, prosecutors refused to comment on whether politics played a role.

Carl Pike, a former DEA agent who spent the last part of his career helping the drug agency chase Guzman, said Thursday he was always confident that the drug lord would be sent to the U.S., but the timing was "interesting."

"It's one way of thanking Obama and another way of saying, 'Mr. Trump, welcome to the arena,'" Pike said.

Derek Maltz, who headed the DEA's Special Operations Division until his retirement in 2014, said the extradition reaffirms Mexico's commitment to working with the United States and curbing the power of its drug cartels, and the timing could be seen as a good-faith effort by the Mexican government.

After breaking out of prison the first time in 2001, Guzman spent more than a decade at large, becoming something of a folk legend among some Mexicans for his defiance of authorities. He was immortalized in ballads known as "narco-corridos."

Captured in 2014, Guzman then made an even more audacious escape, coolly stepping into a hole in the floor of his prison cell shower and whizzing to freedom on a motorcycle modified to run on tracks laid the length of the tunnel.

While on the run, he secretly met with actors Sean Penn and Kate del Castillo in a fall 2015 encounter that Penn later chronicled in Rolling Stone magazine.

Guzman was unapologetic about his criminal activities, saying he had turned to drug trafficking at age 15 to survive.

"The only way to have money to buy food, to survive, is to grow poppy, marijuana, and at that age, I began to grow it, to cultivate it and to sell it. That is what I can tell you," he was quoted as saying in Penn's article, published right after Mexican marines rearrested Guzman last January.

Guzman was ultimately captured after a shootout that killed five of his associates and wounded one marine.

WLS-TV and the CNN Media Wire contributed to this report. 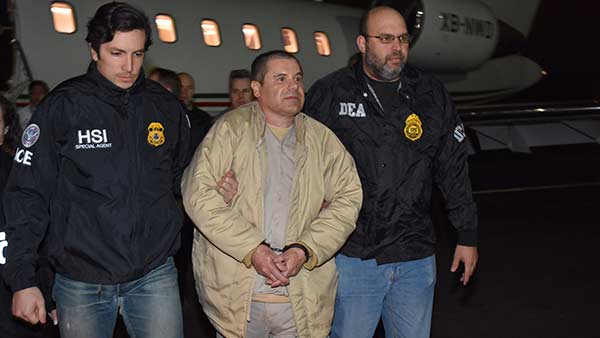