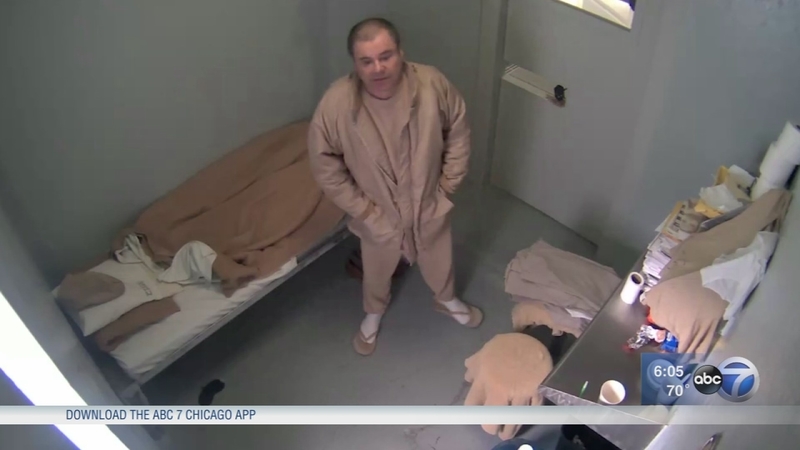 CHICAGO (WLS) -- The drug lord who once had a corner on Chicago's illicit marketplace is a continuing escape threat, requiring a small army of federal employees to make sure he remains locked up.

The latest official to weigh in on the security of Joaquin "el Chapo" Guzman is Brooklyn's top magistrate judge.

El Chapo and his legal team have been fighting for face-to-face meetings in the federal lockup to review the stacks of evidence, so called "contact visits." Federal prosecutors and security officials with the U.S. Bureau of Prisons have strongly opposed such meetings between the kingpin and his lawyers, claiming that Chapo could use the visits as cover for another escape.

As the I-Team reported two weeks ago the government said an extensive and expensive renovation would be required for contact visits costing $150,000 and taking 18-months to finish.

After a legal standoff in the hunt for a solution, Chief United State Magistrate Judge Roanne L. Mann cleared the way Wednesday afternoon for Mexico's most notorious escape artist to have face-to-face meetings with his attorneys.

Judge Mann ordered the contact visits to begin as soon as possible, with El Chapo "shackled" if necessary during the meetings. She also suggested that various security-related upgrades to the meeting room could be carried out faster than the government suggested and at far less cost.

El Chapo is currently under federal indictment in Chicago, where he formerly controlled 80% of the street drug market according to investigators. He will be first tried in Brooklyn on 17 counts "with his alleged role as the principal leader of the Mexico-based international drug trafficking organization known as the Sinaloa Cartel, claimed to be the world's largest and most prolific drug trafficking organization" wrote Judge Mann.

In New York his attorneys have "complained that they have been unable to effectively review discovery with their client because they are limited to non-contact visits, with a physical barrier impeding their consultation" Mann wrote.