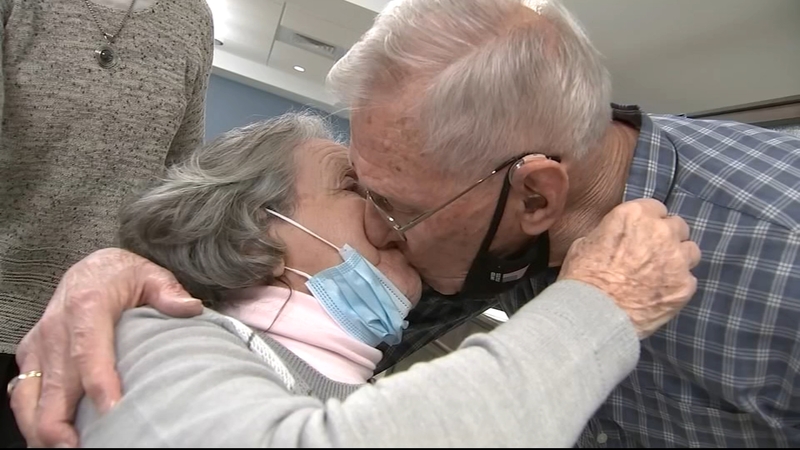 DOYLESTOWN, Pennsylvania -- An elderly husband and wife in Pennsylvania have been able to resume their Sunday brunches together thanks to the COVID-19 vaccine.

"I am gonna give her a big kiss," said Bill Fuller, moments before he greeted Lola, his wife of 72 years. "A hug is only half the deal."

For the past several years, the couple, both 93 years old, have lived at a facility outside of Philadelphia.

The couple's daughter, Ann Teschner, says they are joined at the hip.

The Lawson family embraced Zoom and grew tighter in the process.

The Fullers used to have Sunday brunch every week at the nursing home since they moved there in 2012. But in March of 2020, the COVID-19 pandemic forced a pause on the activity there.

"I could tell by my father's visible appearance, facial expressions, his tone of his voice, I could tell it was really hard, especially at the beginning," Teschner said.

It's been a year since they had that special bond and shared a meal.

"How is that?" asked Bill when he kissed Lola for the first time.

"Wonderful, do it again," she said.

After all these years, they still like to reminisce about their first date.

"When I laced up your ice skates," Bill recalled.

Bill said the secret to their union lasting: limited fights and always kiss and makeup.

After seven decades, the words were few as they sat and ate slowly while just enjoying each other's company. Bill even shared his bacon. The moment was one they've shared countless times, but this one felt just a tad more special.

"They both looked younger to me on Sunday," said Teschner. "They just looked on top of their game."