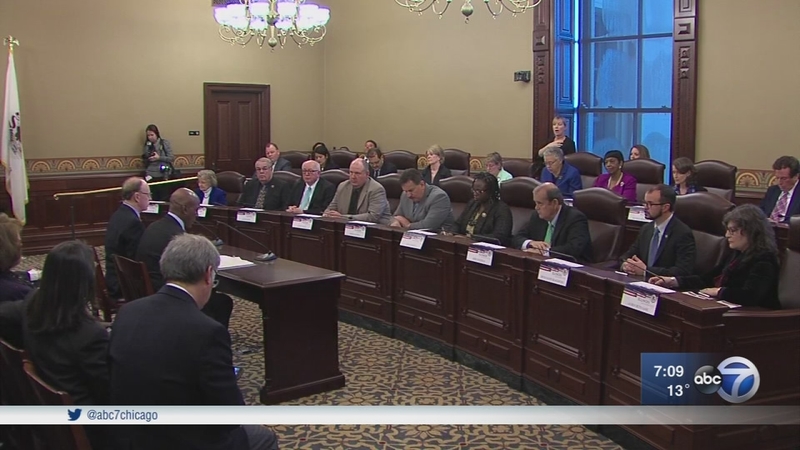 SPRINGFIELD, Ill. -- There were many protesters but few faithless electors as Donald Trump won the Electoral College vote Monday - ensuring he will become America's 45th president.

An effort by anti-Trump forces to persuade Republican electors to abandon the president-elect came to practically nothing and the process unfolded largely according to its traditions. Trump's polarizing victory Nov. 8 and the fact Democrat Hillary Clinton had won the national popular vote had stirred an intense lobbying effort, but to no avail.

"We did it!" Trump tweeted Monday evening. "Thank you to all of my great supporters, we just officially won the election (despite all of the distorted and inaccurate media)."

Even one of Trump's fiercest Republican rivals, Ohio Gov. John Kasich, said it was time to get behind the president-elect.

"We want unity, we want love," Kasich said as Ohio's electors voted to back Trump at a statehouse ceremony. Kasich refused to endorse or even vote for Trump in the election.

With Hawaii still to vote, Trump had 304 votes and Clinton had 224. It takes 270 Electoral College votes to win the presidency. Texas put Trump over the top, despite two Republican electors casting protest votes.

Befitting an election filled with acrimony, thousands of protesters converged on state capitols across the country Monday, urging Republican electors to abandon their party's winning candidate.

More than 200 demonstrators braved freezing temperatures at Pennsylvania's capitol, chanting, "No Trump, no KKK, no fascist USA!" and "No treason, no Trump!"

Despite the noise outside state Capitols, inside, the voting went pretty much as planned.

In Nashville, Tennessee, one audience member tried to read out some Scripture before the ballots were cast, but was told he could not speak.

"We certainly appreciate the Scripture," State Election Coordinator Mark Goins said from the podium. "The answer is no."

With all Republican states reporting, Trump lost only the two electors in Texas. One voted for Kasich, the Ohio governor; the other voted for former Texas Rep. Ron Paul.

Several Democratic electors in other states tried to vote for protest candidates but they either changed their votes to Clinton or were replaced.

The Electoral College has 538 members, with the number allocated to each state based on how many representatives it has in the House plus one for each senator. The District of Columbia gets three, despite the fact that the home to Congress has no vote in Congress.

Republican electors were deluged with emails, phone calls and letters urging them not to support Trump. Many of the emails are part of coordinated campaigns.

In Baton Rouge, Louisiana, elector Charlie Buckels reached out to Trump's opponents after the New York businessman got all of the state's eight votes.

"For those of you who wished it had gone another way, I thank you for being here," said Buckels, the state GOP finance chairman. "I thank you for your passion for our country."

Those laws, however, are rarely tested. More than 99 percent of electors through U.S. history have voted for the candidate who won their state. Of those who refused, none has ever been prosecuted, according to the National Archives.

Some Democrats have argued that the Electoral College is undemocratic because it gives more weight to less populated states. That is how Clinton, who got more than 2.8 million more votes nationwide, lost the election to Trump.

Some have also tried to dissuade Trump voters by arguing that he is unsuited to the job. Others cite the CIA's assessment that Russia engaged in computer hacking to sway the election in favor of the Republican.

"When the founders of our country created (the Electoral College) 200-plus years ago, they didn't have confidence in the average white man who had property, because that's who got to vote," said Shawn Terris, a Democratic elector from Ventura, California. "It just seems so undemocratic to me that people other than the voters get to choose who leads the country."

A joint session of Congress is scheduled for Jan. 6 to certify the results of the Electoral College vote, with Vice President Joe Biden presiding as president of the Senate. Once the result is certified, the winner - almost certainly Trump - will be sworn in on Jan. 20.

Members of the Electoral College in Illinois officially cast their votes Monday morning at the Illinois Capitol in Springfield.

Most had said they will vote for Hillary Clinton, who won the Illinois presidential election in November. There are 20 electors in Illinois of the 538 electors across the country. All 20 voted for Clinton.
Republican President-elect Donald Trump won the Electoral College vote nationally.

Trump is poised to win 306 of the 538 electoral votes under the state-by-state distribution of electors used to choose presidents since 1789. That's far more than the 270 electoral votes required to win the presidency.

One faithless elector has cast a vote in Maine - for Sen. Bernie Sanders.

David Bright said on his Facebook page that he cast his vote for Sanders, instead of Hillary Clinton because his vote would not have helped her win.
"I cast my Electoral College vote for Bernie Sanders today to let those new voters who were inspired by him know that some of us did hear them, did listen to them, do respect them and understand their disappointment," he wrote.

Clinton won the popular vote in the Nov. 8 election.