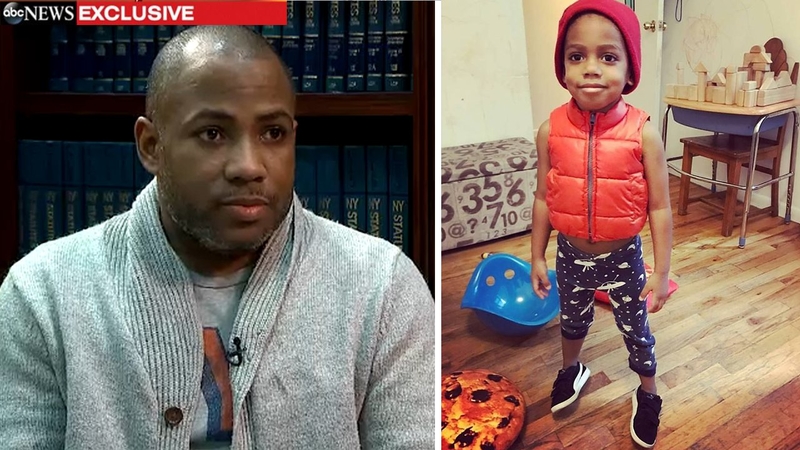 NEW YORK -- The father of the 3-year-old boy who died at his pre-school after eating a grilled cheese sandwich spoke exclusively to ABC News.

The parents of this young victim were huddled with their attorney in Midtown Thursday evening.

For the first time, they spoke out about this terrible tragedy.

"When I got to the hospital it was too late," said Thomas Silvera, the victim's father.

Thomas and Dina Silvera, having lost their 3-year-old son Elijah, are deeply grieving his death.

Thomas remembers getting a phone call from Harlem Hospital.

While at pre-K at the Seventh Avenue Center for Family Services, on November 3rd, little Elijah, his family claims, was given a grilled cheese sandwich, even though they say school officials were aware that he had a severe allergy to dairy products.

Elijah is said to have gone into anaphylactic shock and was rushed to Pediatric Emergency at Harlem Hospital by his mother, because the staff called her instead of 911. They were not able to save his life.

"The only thing I can do is hang up and go and when I got to the hospital it was too late," Thomas said.

The center, Thursday night, is shut down. Children and their parents were turned away earlier Thursday, as two city agencies are investigating Elijah's death.

"We do believe this is an isolated incident," said Dep. Cmsr. Lorelei Vargas, Administration for Children's Services. "But there is an active investigation and we hope to learn more."

The center's pre-K program is regulated by the city's Health Department. The center's website says children are safeguarded, "...by consulting with parents immediately when health or developmental problems are suspected or identified."

It doesn't say anything about calling 911.

Staffers are, "...certified in First Aid and CPR. Each classroom is supplied with a First Aid Kit and emergency contact numbers are posted in each center."

It is not known if those kits contain an epinephrine injector.

"How can you not call 911? I'm in a state of shock. I just can't believe that happened," a Harlem resident said.

There are still many unanswered questions for investigators and Elijah's family.