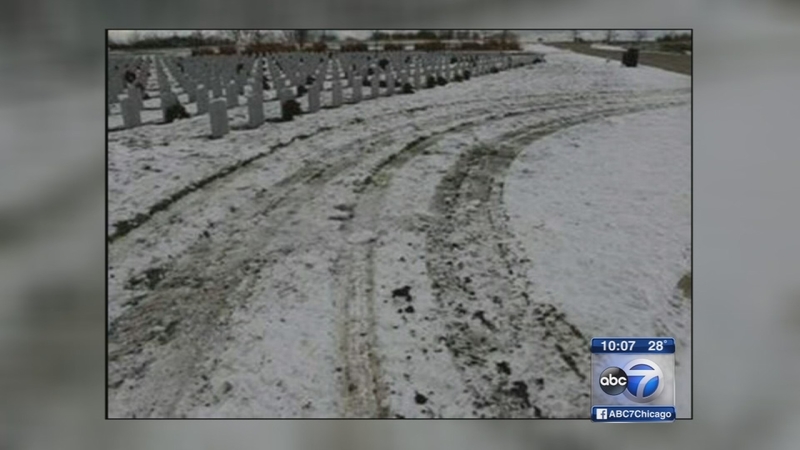 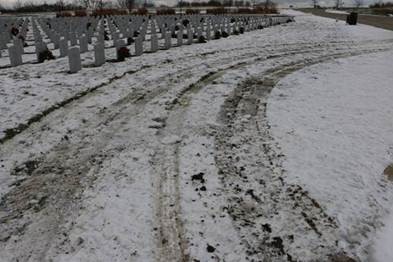 Disobeying the "No Truck" signs clearly posted at the entrance to the national cemetery off of Route 53 on Monday afternoon, police say, the trucker said he was traveling to a warehouse located at the nearby intermodal facility.

Police say the 43-year-old driver proceeded to roll the truck over the three graves, narrowly missing several headstones, then was stopped by cemetery staff who notified police.

"There is surface damage to the grass on the grave sites, what we don't know is whether there is collapse damage," Hayes said.

Police issued three citations to the driver, who listed his residence in Chicago. He was cited with disobeying a 5-ton weight limit sign, operating an over length truck and spilling debris on the roadway.

Cemetery staff must wait for warmer weather conditions to determine the extent of the damage and if there was any danger of the burial sites collapsing.

A spokesperson for Marko Transport says the company and the driver are "sorry for what occurred" and intend to pay for any damage.

This is the latest chapter in a long standing feud between big rigs and this small town. Two years ago, Eyewitness News reported on dangerous conditions as truckers crossed railroad tracks, frequently breaking safety gates.

The crossing has since been closed. But as this week's cemetery mishap demonstrates, the problems are not over.

"When you have a semi-truck driving over grave sites, that's where it's got to end," Hayes said.

A spokesperson for CenterPoint, the company that owns the intermodal facility that sees more than 8,000 heavy trucks a day, calls the cemetery incident "appalling" and says local and state officials need to upgrade area roads.