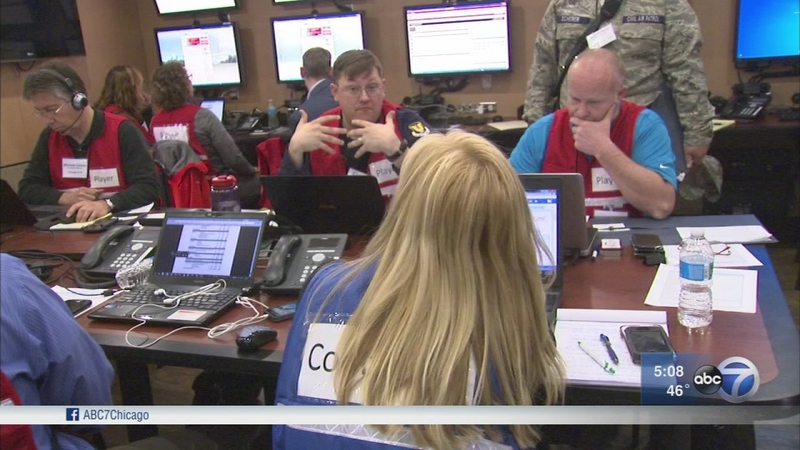 CHICAGO (WLS) -- From massive weather damage to other catastrophic events, Illinois emergency agencies are working with companies like Com Ed to prepare for the worst. A statewide drill to that end was held Friday, to practice for emergency response.

Those involved want to make sure they're ready, just in case.

Dozens of public agencies and private entities came together for a third time for Operation Power Play 2017.

"When something does happen, it's good to be connected," said Michael Wallace, BMO Harris bank.

The statewide drill was to help prepare for the real life emergency scenarios.

"If there was an actual event throughout the city, we'd just all be better prepared," said First Deputy Rich Guidice, OEMC.

"It's important that all the agencies come together, one day, one drill," said 30th Ward Alderman Ariel Reboyras.

It was a place where state, county and municipal agencies, along with Chicago area utilities, could test their response to severe weather and other catastrophic events.

"In the initial phases of an emergency, it takes a while for us to coordinate. This is a chance for us to do that coordination ahead of time," said Col. Jerry Scherer, Civil Air Patrol.

Organized Com Ed, the emergency preparedness exercise is conducted every other year, after the utility participated in a similar exercise. Since then, there's been a commitment to what Com Ed CEO Anne Pramaggiore described as "drill emergency events, so we could see where are our gaps in communications, where are our gaps in response."

The morning drill took place at the University of Illinois - Chicago campus where there were table top exercises. Chicago mayor Rahm Emanuel also viewed equipment and vehicles that would be used as a part of any response.