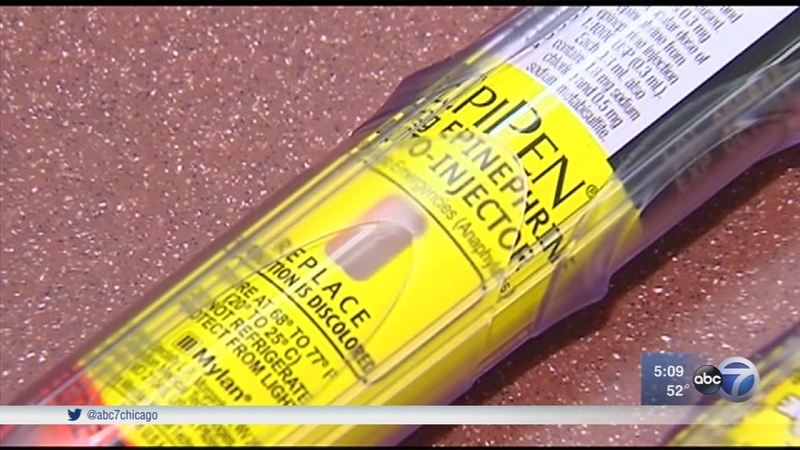 ELMHURST, Ill. (WLS) -- There is a renewed effort to get life-saving epinephrine auto-injectors into the hands of police officers, health care providers and others across the state. There is already a law place for them to carry the injectors, but a legal loophole has delayed their use.

"Amazing Annie" LeGere will always have a special place in Elmhurst's Crescent Park. Annie's family wants to build a legacy for the 13-year-old who died from an unknown allergic reaction at a sleepover in 2015 that may have been caused by food.

"She was always the really beautiful kind girl who always looked out for everybody and always wanted to be a friend to everybody," her mother, Shelly LeGere, said.

Elmhurst Police were first on the scene that night, but officers didn't carry the epinephrine auto-injectors that could have saved her life.

The Annie LeGere Law went into effect in January 2017, making it possible for police officers to carry and administer epinephrine. But more than a year later, officers in Elmhurst still don't carry them.

"To say disappointing is somewhat of an understatement," LeGere said.

State Senator Chris Nybo (R-Elmhurst) says the delay is because police departments, municipalities and health care providers across the state are worried about the liability.

"Those that want to are reluctant to because they're having difficulty finding health care providers to administer the medicine to them," Nybo said.

That's why he recently introduced an amendment to the Annie LeGere Law increasing liability protection. Earlier this month, it passed in the Senate and it is moving on to the House.

"They're just excited to begin getting this important medicine into the hand of police officers as soon as they can,"

Funding for the medicine and officer training will be provided, in part, by the Annie LeGere Foundation. LeGere's family said it's the least they can do to honor their little girl.

"Nothing is going to change my life or bring Annie back or change anything about me. But if Epi can be administered during one of these crises for someone else, that's a life saved," she said.