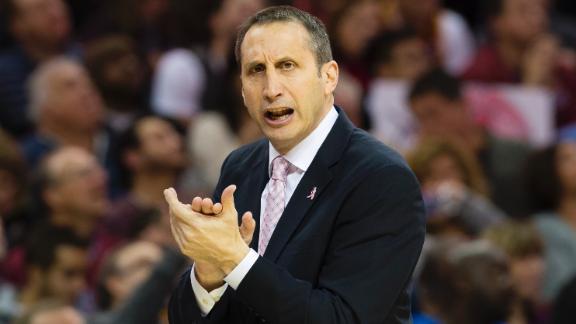 "This narrative of our coaching situation is truly ridiculous," Griffin told reporters on Sunday. "It's a non-story, it's a non-narrative. Coach Blatt is our coach, he's going to remain our coach. Do not write that as a vote of confidence. He never needed one. It was never a question. So don't write it that way."

League sources told ESPN.com last week that there is a growing level of worry within the Cavaliers organization about Blatt and his ability to reach the team. Sources told ESPN.com that there is rising concern in team circles about the level of response that Blatt is getting on the floor, with Blatt himself acknowledging that the team "lost our energy and we lost our competitiveness" in last Sunday's embarrassing home loss to Detroit.

Griffin rejected the notion that Blatt's job is in jeopardy, saying, "No change is being made, period."

"It's such a ridiculous assertion. It seemed giving life to it is what would happen by talking about it so I didn't want to do that," Griffin said. "At the same time it's just time for everybody to get on with it. We have a chance to galvanize ourselves and grow and move in a positive direction so I want to make sure we're doing that in a fresh environment."

The Cavaliers fell to 19-15, the fifth-best record in the Eastern Conference, after Sunday's 109-90 home loss to the Dallas Mavericks.

Griffin said the team, which now has a $5.2 million trade exception and a $4.9 million disabled player exception, is "very actively working the phones and doing everything we can to improve the team."

But withLeBron Jamessidelined for at least two weeks with strains to his lower back and left knee, injuries to Kevin Love and Kyrie Irving throughout the season, and Anderson Varejao's season-ending Achilles injury, the Cavs have struggled with consistency.

"We're like traveling with the Beatles," Griffin said. "I'm not surprised, but I've been disappointed the slant has been an attempt to be so negative all the time. This is exactly what we said it's going to be: It's a work in progress and we're going to continue to get better every day."

ESPN.com's Marc Stein and Brian Windhorst contributed to this report.