Facebook to invest $800M for data center in DeKalb 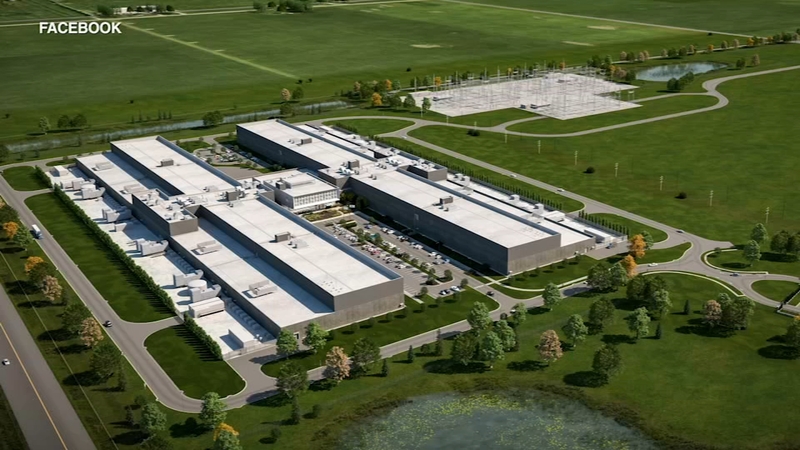 DEKALB, Illinois (WLS) -- Facebook announced Tuesday that it will be investing $800 million for a new data center that will be built in DeKalb, Illinois.

The company estimates that the facility will support an estimated 100 jobs to operate the facility as well has hundreds of construction jobs.

There are many variables that enter into the decision process for data center locations, and DeKalb provided many compelling reasons for Facebook to bring our newest data center to Illinois," said Rachel Peterson, Vice President of Data Center Strategy for Facebook. "We're so thankful to the City of DeKalb, the DeKalb County Economic Development Corporation, the Illinois Department of Commerce & Economic Opportunity, and all of our community partners for their diligence and enthusiasm throughout this process. We are proud to join the DeKalb community and look forward to a strong relationship for years to come."

"The State of Illinois is thrilled that Facebook has chosen to build a state-of-the-art data center that will advance our commitment to growing technology and renewable energy throughout Illinois," said Acting Director of the Illinois Department of Commerce and Economic Opportunity (DCEO), Michael Negron. "Under Governor Pritzker's leadership, more companies continue to make Illinois a destination - based on the talent of our people, access to education and amenities, and our continued investments to modernize shared infrastructure. We thank Facebook for the vote of confidence in DeKalb and the State of Illinois, and for investments today that will create high-paying jobs for our communities tomorrow."

The city said Facebook bought the more than 500 acres of land from local farmers.

According to county records the company spent $80,000 an acre, which includes costs for infrastructure.

"Even though we gave them a 50 percent property tax rate over the next 20 years...over that time...the benefit will eclipse what we get from Nestle, Panduit , and Target," said DeKalb Mayor Jerry Smith. "This will be huge.

Just down the road, Ferrara Candy is building a new distribution center in another big boost for DeKalb's economy.

"This could be the start of other high tech firms looking at the city of DeKalb," Smith said.