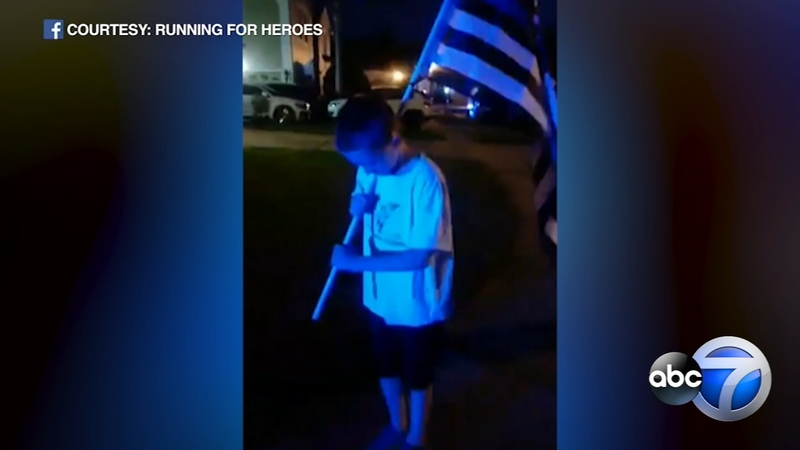 Deputy Keltner was shot and killed while assisting in the arrest of a fugitive in Rockford on Thursday.

Zechariah runs a mile for every fallen officer and posts it to his Facebook page "Running for Heroes".

The hope is that people will raise money for the Tunnel to Towers foundation, which in Deputy Keltner's case, will help pay off his mortgage for his widow and two children.

"It makes me heartbroken when I hear that somebody struck an officer and fatally shot him, so it needs to stop and I'll keep doing until it stops" Zechariah said shortly before his run.

The Casselberry Police Department supported Zechariah's run by bringing out multiple cruisers. An officer also joined Zechariah on his run, which consisted of four and half laps around his block.

Zechariah's passion to start running for fallen officers began in 2017 when he ran the Orlando Tunnel to Towers 5k.

"He truly has a heart for our fallen heroes," says Zachariah's father, Chad Cartledge.

"We get that there are a handful of bad apples in the world, but our son understands that 99.9 percent of our officers would literally sacrifice their life for any of us," Cartledge said.

The flag Zechariah ran with to honor Deputy Keltner has been sent to the family.

"Anytime he runs with the flag, that flag gets sent to the family of the officer or their department if the family is unable to be reached," Cartledge explained.

This particular flag is co-sponsored by two Buffalo Grove officers, the Illinois Patriot Guard, as well as an anonymous police officer.

"He was an amazing person who did not deserve this. Hopefully his family and the department, if they watch this, they get a little happiness in their time of sorrow," Zachariah said.