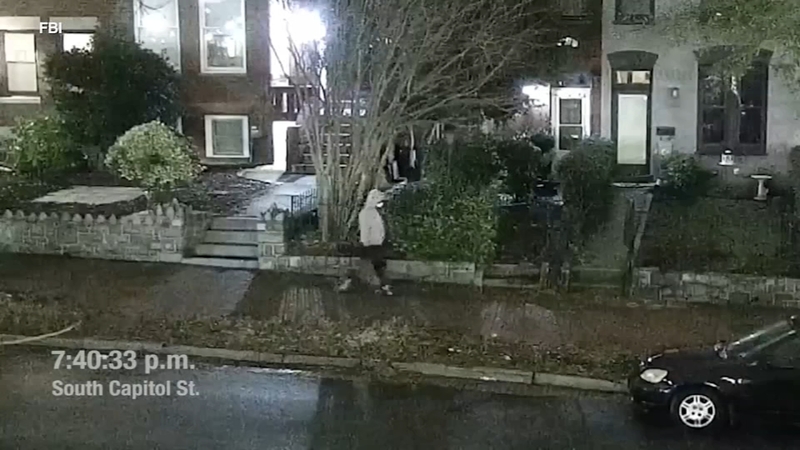 CHICAGO (WLS) -- The FBI has released new video of a hooded, masked suspect delivering backpacks the night before the hostile takeover of the United States Capitol.

Inside the backpack, according to federal law enforcement, there was a pipe bomb that was deposited outside RNC headquarters in Washington D.C.. A second bomb was also left that night in front of the DNC headquarters.

"These pipe bombs were viable devices that could have been detonated, resulting in serious injury or death. Our immediate goal is to identify and locate the person who placed these devices before they harm themselves or others," said FBI Washington Field Office Assistant Director in Charge Steven D'Antuono in a video statement released Tuesday with the new surveillance video.

As the FBI tightens the screws on the Capitol Hill bomber, the timing shouldn't be lost: the explosive devices were planted Jan. 5, the night before President Trump's rally-turned-takeover of the U.S. Capitol by some of his supporters, militia members and anti-government extremists. Federal law enforcement officials believe these videos point to a distinct level of pre-planning, prior to Jan. 6.

RELATED: How a security breakdown enabled an angry mob to take over the US Capitol

"These devices were placed the evening before the Capitol riots. between 7:30pm and 8:30pm," D'Antuono said in the video statement. "We have released video and photos of the individual, including of their shoes, the devices, and the kitchen timers used, in hopes that someone recognizes something familiar about them."

The casualness of the attacker is also apparent in the video, as a man walks by the backpack bomb with his dog down a residential street. Then, surveillance video spots the would-be bomber on a park bench near DNC headquarters. These are all fresh clues that the FBI hopes will put a name to the mystery suspect.

More than two months after this attack, the FBI continues to make arrests linked to the chaos, with nine people taken into custody this week alone.