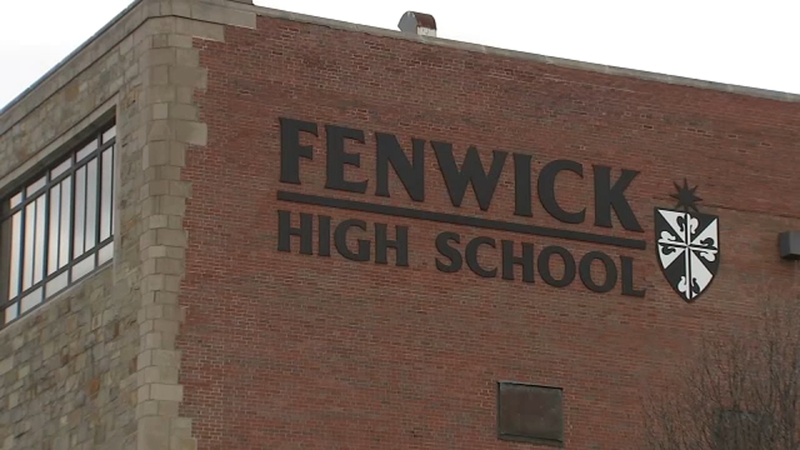 OAK PARK, Ill. (WLS) -- A former Fenwick High School student from Oak Park is accusing a long-time teacher and coach at the school of abuse. Now, the school has placed that teacher on administrative leave pending the results of a third-party investigation.

"His obsession with stalking me grew. When I was going to my religion class, he'd stop me, wrap his arms around me, put me in almost a headlock, press his cheeks and even his lips against my face and ask me about my love life," said Helen Quinn-Pasin in a YouTube video uploaded this week.

The two are not related.

That YouTube video has been viewed more than 33,000 times.

The Village of Oak Park confirms Quinn-Pasin contacted police on September 24 last year about multiple alleged incidents that took place between 2013 and 2014.

Oak Park officials said police conducted a thorough investigation, interviewed all parties involved and even consulted with the Cook County State's Attorney sex crime unit. They said the unit did not believe the allegations warranted felony sex crime charges, but may have warranted misdemeanor battery charges.

However, the statute of limitations for such charges had expired and Oak Park police closed the investigation with no charges.

Now, Fenwick High School is conducting its own third-party investigation and has placed John Quinn on leave pending the results.

"As some of you know, this morning a Fenwick alumna posted a video detailing her experience as a student at Fenwick and our handling of a serious matter involving a faculty member.

Please be assured that we took, and are taking, her allegations seriously and the inquiry into the incidents she describes is ongoing.

Fenwick has been in contact with the Oak Park Police Department regarding this matter. Their investigation concluded this past fall, and no charges were brought.

Through an independent third party, Fenwick has offered to provide a forum the alumna finds acceptable to make a statement in detail, but nonetheless, we are moving ahead with the investigation of the conduct she brought to our attention in December 2021.

The safety of the young people entrusted to our care is of the utmost importance to us. If anyone feels he or she has suffered abuse or other misconduct at Fenwick, we ask them to come forward with any information and to receive the help and healing they deserve."

John Quinn released a statement through his brother Thomas, who said Quinn is cooperating fully with Fenwick's third-party investigation.

Statement on behalf of John Quinn

"John Quinn has given his heart and soul to teaching at Fenwick High School for over 40 years. Throughout his career, John has provided his students with an outstanding education.

John has regularly won teaching awards, including many that originated from student nominations. Those awards include the coveted Golden Apple Award, which John won in 1992. The Golden Apple Award honors a select group of outstanding teachers in the Chicago area each year.

John also coached basketball for over 33 years at Fenwick. In recognition of his success and the great devotion that he showed to his players during his coaching career, John was elected to Catholic League Hall of Fame and the Illinois Coaches Association Hall of Fame.

Each year, dozens of John's history students trust John to write letters of recommendation for their college applications.

Countless numbers of John's students and players have applied the life lessons that he taught them and have gone on to have successful careers themselves.

John looks forward to continuing in the profession to which he has devoted his entire career."

ABC7 has reached out multiple times to Helen Quinn-Pasin for an interview but has not heard back.