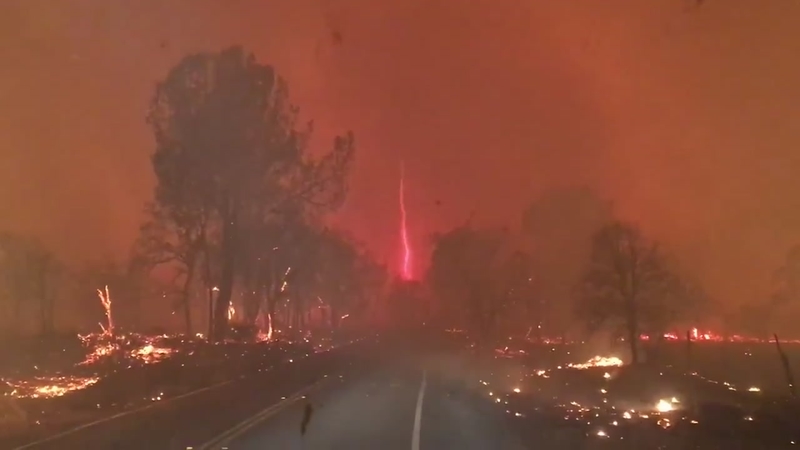 BUTTE COUNTY, Calif. -- Apocalyptic scenes show a firenado swirling amid a scorched part of Butte County as the Camp Fire that forced thousands to evacuate rages on.

ABC7's Laura Anthony says she captured this video from a safe distance near the town of Paradise.

Get the latest on the Camp Fire burning in Northern California here.

From a pregnant woman who went into labor while being evacuated to seniors in a nursing home that can't get through to 911, here's the terrifying police radio detailing the terrifying evacuation in Butte County.

The so-called Camp, Woolsey and Griffith Park fires are causing mass destruction and mandatory evacuations, including for the upscale city of Malibu west of Los Angeles. The Woolsey and Griffith Park fires are burning in the area of Ventura and Los Angeles counties, while the Camp Fire is burning in Butte County, less than 100 miles north of Sacramento.

The Camp Fire sparked early Thursday, and on the same day, five unidentified people were found dead in cars in the small town of Paradise, the Butte County Sheriff's Office said Friday. Firefighters have struggled to manage the fire, which has since grown to 70,000 acres and is still only 5 percent contained, according to authorities.

Near the Los Angeles Zoo, the Griffith Park Fire began as a brush fire Friday morning and rapidly grew to 30 acres by the early afternoon. It was 15 percent contained after about four hours, according to the Los Angeles Fire Department.

The Woolsey Fire started as a brush fire south of Simi Valley, about 40 miles northeast of Downtown Los Angeles. It grew to 14,000 acres overnight and is at 0 percent containment, KABC reported.