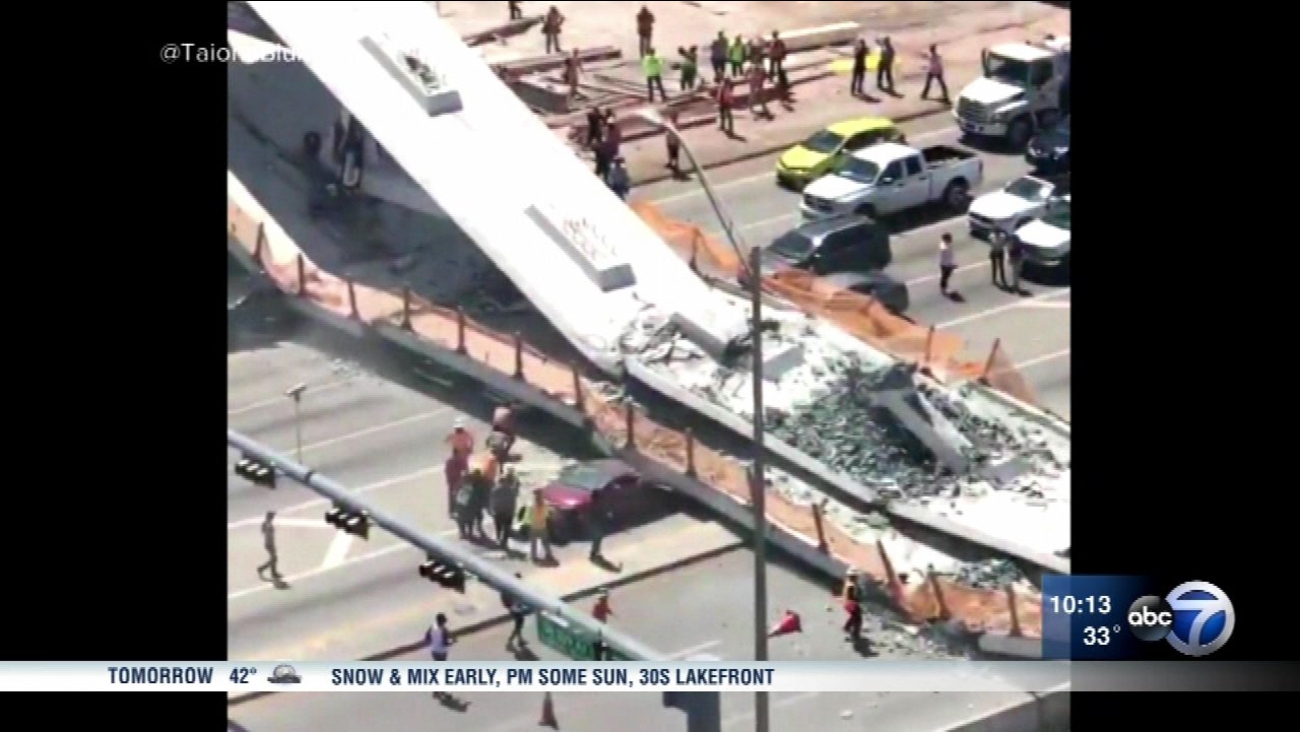 A bridge collapsed in Miami Thursday.

MIAMI -- The remains of five people have been recovered from the rubble of a pedestrian bridge that collapsed in South Florida, bringing to six the number of people killed in the collapse, Miami-Dade County Police Director Juan Perez said late Saturday.

In another development, Florida International University revealed that engineers talked about the structural integrity of the span hours before its collapse on Thursday and deemed it safe.

Perez said authorities don't expect to find additional victims but will go through the rubble once more as a precaution.

Miami-Dade police have identified four of the people killed. The bodies of Rolando Fraga Hernandez; Oswald Gonzalez, 57; and Alberto Arias, 53, were pulled from the rubble on Saturday, authorities said. Navarro Brown was taken to a hospital earlier and died there.

The family of FIU student Alexa Duran has said that she was killed in the collapse, but police have not named her as being among the dead.

Perez said 950 tons of rubble were moved in the search for the victims.

Miami-Dade County Deputy Mayor Maurice Kemp cautioned Saturday that the final death toll won't be known until all the vehicles are removed.

Six cars have been recovered and at least two more vehicles remain in the rubble, police said. Workers covered the crumpled cars they recovered with tarps and placed them onto flatbed trucks that took them away.

Crews were "paying respect with a moment of silence" before sending them to the medical examiner's office, Miami-Dade police Director Juan Perez said.

"It's going to be a long process" to remove the remaining vehicles, Perez said, "because (of) the ... weight and size of the structure that is laying on top of these vehicles."

In a statement Saturday, FIU said a two-hour meeting was held at 9 a.m. Thursday at the construction site to discuss a crack that had appeared on the structure, put in place days earlier.

"The FIGG engineer of record delivered a technical presentation regarding the crack and concluded that there were no safety concerns and the crack did not compromise the structural integrity of the bridge," the statement said.

The bridge collapsed around 1:30 p.m. that day.

A spokesperson for FIGG could not be reached for comment Saturday.

Two days before the span fell, a FIGG engineer called a FDOT employee to warn of "some cracking."

The state employee was out on assignment that day. The call from W. Denney Pate of FIGG went unanswered, and the voice mail he recorded unheard -- until Friday, the day after the span fell.

In Tuesday's voice mail, Pate said the cracking on the north end of the span should be repaired. However, he added, there were no safety concerns on the project.

"We've taken a look at it and, uh, obviously some repairs or whatever will have to be done," Pate said.

"But from a safety perspective, we don't see that there's any issue there so we're not concerned about it from that perspective, although obviously the cracking is not good and something's going to have to be, ya know, done to repair that."

The bridge was supposed to enhance safety and keep pedestrians safe from traffic on busy Southwest Eighth Street, where a vehicle fatally struck an FIU student in August. The collapse happened months before completion.

It's too early to tell whether the bridge failed when construction workers were applying post-tensioning force to strengthen the beams, said Robert Accetta of the National Transportation Safety Board.

Accetta said a crack in the bridge "does not necessarily mean that it is unsafe."

Sen. Bill Nelson of Florida is asking the US Department of Transportation for documents related to the "engineering, design, construction, safety and inspection."

"In light of the fact that there were multiple agencies and companies involved, we're going to need a clear understanding of who had what role in this horrible tragedy," Nelson said in a statement Friday.

Authorities have said crews may find more people as they dig through the rubble.

Among the six killed is Alexa Duran, her father told el Nuevo Herald.

The FIU student was driving under the bridge Thursday when it crashed down. A friend traveling with Duran tried but couldn't pull her out.

"My little girl was trapped in the car and couldn't get out," Orlando Duran said.

Alexa Duran's sister, Dina, posted her feelings on Instagram. "Rest In Peace my sweet little sister. Words cannot describe how heavy my heart is. I would give anything to take your place and all of your pain," she said.