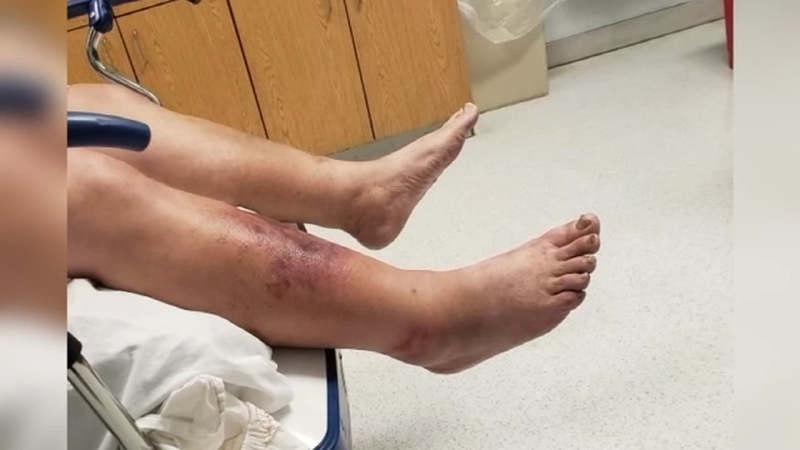 LAKE CHARLES, La. -- A Louisiana man is recovering in the hospital after getting infected with a flesh-eating bacteria.

Experts say that bacteria is showing up earlier this year than usual, and warn beachgoers to be cautious.

"This infection is something that will go from a fun day at the beach to an extremely painful wound within hours," said Dr. Stephen Castleberry with West Cal Cam Hospital. "Overnight can be sepsis and septic shock, and aggressive therapy to try to do what you can to save life and tissue."

That's exactly what happened to Jessie Abshire, who is now recovering in the ICU after contracting a flesh-eating bacteria while crabbing in Cameron Parish.

"Not long in the water either. Just a couple hours we were there at the most," said Jessie's wife, Belinda Abshire.

Now Belinda and her daughter Amanda, are sharing his story in hopes it saves even one person from suffering like he has.

They are calling it a near-death experience and warning that it can happen to anybody, KPLC reported.

"Getting better slowly each day. We got a long road ahead of us," said Belinda's daughter, Amanda Savoie.

"Who would have thought we had gone crabbing in ankle-deep water, then two days later, you're almost dying in the hospital," Belinda said.

This type of flesh-eating bacteria, known as vibrio vulnificus, can affect the intestinal tract.

Dr. Castleberry said this time of year they are most worried about skin infections.

"What we worry about is anyone that's immunocompromised, so even just diabetes, mild liver disease. When patients don't know about it and any break in the skin, even a several day old tattoo, a small cut that you don't even recognize beforehand," he said.

Dr. Castleberry said this bacteria is showing up about 4-6 weeks earlier than what he's seen in past summers.

He is also advising people to take extra caution if they're headed to the beach this summer.

"Anytime you're in brackish water, Gulf water, during these times of the month, it doesn't hurt to wash off after you leave the beach. If you have any kind of fresh wounds, don't go in the water," Dr. Castleberry said.

He recommends washing any abrasion with soap and water immediately after, especially if you get a scrape from the rocks or a wound from a fishing hook or net. And of course, if a wound is getting painful, seek medical care immediately.

"When in doubt, go see somebody quick," he said.