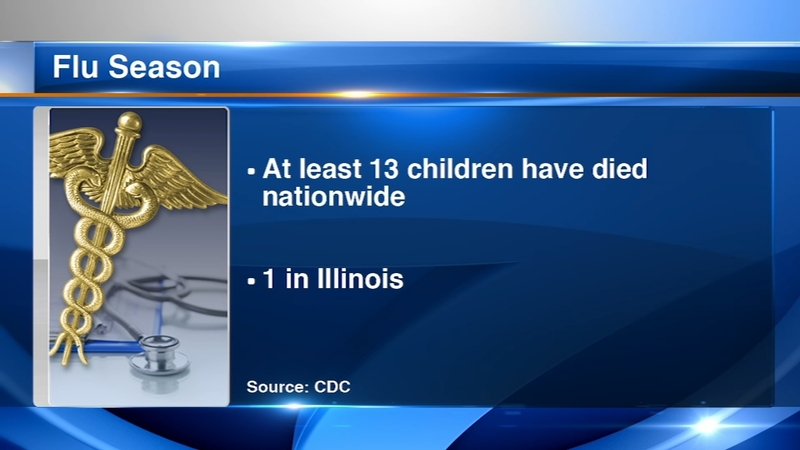 The Centers for Disease Control is now reporting a widespread presence of the flu virus in 24 states. At least 13 children have died as a result of the flu so far, though only one in Illinois.

The Kane County Health Department and Kane County Coroner confirmed Wednesday that death took place in Aurora. The victim, was a 3-year-old girl who died December 21 at Rush-Copley Medical Center.

She's the second child to have died from flu-related complications in Kane County over the last year. The first was 5-year-old Mia Lobo from Carpentersville.

"Before that we hadn't had one in several years. It is unusual and terribly sad when it happens," said Kane County Health Department Public Information Officer Tom Schlueter.

Schlueter said he did not know whether the 3-year-old had gotten a flu shot, but pointed to the CDC's guidelines on the issue.

"Younger children have not had the opportunity for their immune system to build up the resistance to most illnesses. That's one of the issues that we try to push. Everybody over the age of six months should get a flu vaccination," he said.

Medical experts admit the flu shot is not perfect. Some people may still get sick, but are unlikely to suffer complications that lead to hospitalization or death.

The flu shot takes two weeks to take full effect and should ideally be given as soon as it's available in the fall, but it's never too late to get it.

While the CDC says everyone over 6 months old should get the vaccine, they stress that it is children under 5, pregnant women, seniors and those will compromised immune systems who, if not vaccinated, are most at risk of contracting the disease and ending up with serious health complications as a result.

During the 2017-2018 flu season approximately 80 percent of children who died as a result of the flu had not been vaccinated.